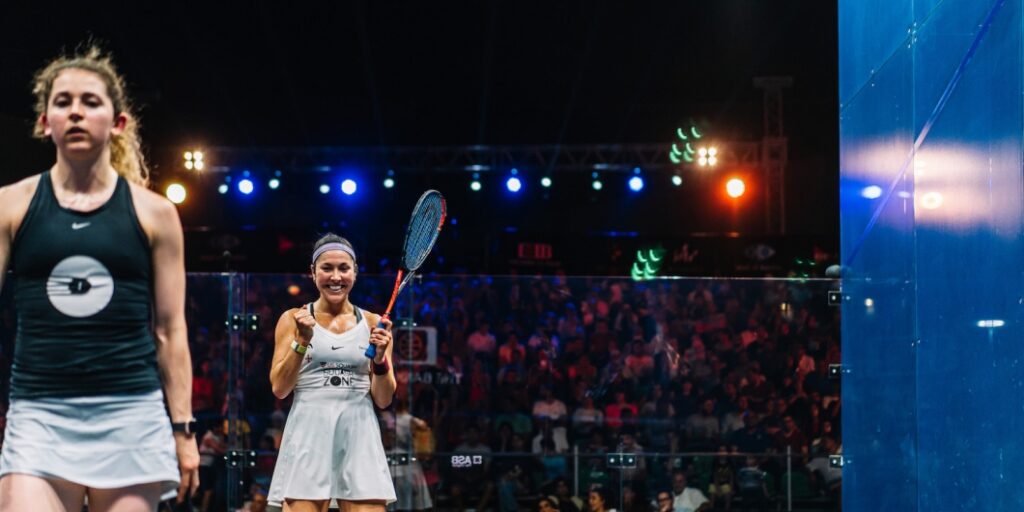 World No.4 Amanda Sobhy has become the first US-born player ever to reach the semi-finals of the CIB PSA World Tour Finals after she put in a sublime display to overcome England’s Georgina Kennedy in her final match in Group A at Cairo’s Mall of Arabia earlier today.

Sobhy hadn’t made it out of the group stages at any of her previous three appearances at the season-ending tournament, but the United States No.1 put an end to that record after taking out Kennedy 11-4, 11-4 in 21 minutes to finish second in Group A.

“I haven’t done too well here in the past and the fact that I’ve qualified into the semis along with the Egyptians makes it three-and-a-half Egyptians.

“It’s awesome to be up there among the top three, who have been kind of raising the bar and hopefully I can give them hell tomorrow.”

Sobhy will line up against World Champion Nour El Sherbini in the last four after El Sherbini finished top of Group B following her match with World No.3 Hania El Hammamy last night. The semi-finals will retain the best-of-three games scoring format used throughout the group stages, before the finals revert to best of five as seen at the majority of PSA World Tour events.

Defending champion Nouran Gohar will take on El Hammamy in the last four – a repeat of last season’s World Tour Finals title decider – after she continued her 100 per cent record, making it three wins from three, winning six games from six and earning the maximum 12 points on offer in the group stage.

The World No.1 got the better of New Zealand’s Joelle King, powering to an 11-6, 11-1 victory over the World No.5 to rubber-stamp her credentials as the title favourite.

Afterwards, Gohar said: “I knew Joelle was going to come and try to play her best because she had a chance, if she won this one, to qualify, so I was up for it and wanted to be fair to everyone. I just tried to play my best and I’m pleased with the performance today.

“[Hania’s] in the top three in the world, so she’s obviously a very good player. It’s always tough between us and last year we played in the final of the World Tour Finals. This year, it’s a bit earlier, but still a tough match and I’ll just prepare for it.”

England’s Sarah-Jane Perry secured third place in Group as her PSA season came to an end with a win against Egypt’s Rowan Elaraby.

With the semi-final qualifiers already confirmed in the men’s event after yesterday’s action, all that remained was to decide who would face who in the last four, with World No.1 Ali Farag overcoming World No.3 Mohamed ElShorbagy in a quick-fire victory to the former.

It was a repeat of the World Championship final and, despite the scores being close at 11-8 and 12-10, Farag was able to gain the upper hand to top Group A, and he will line up against reigning champion Mostafa Asal for a place in the final.

“Obviously, it’s a tricky one because you want to conserve your energy for tomorrow,” said Farag.

“It would mean a lot [to win]. I’ve never got my hands on this trophy. It’s a very prestigious one, lots of great players have won it. I’d love to win it one day and what better a way to do it than at home here, to put the cherry on top of the cake to end the season on a high. I’ve got a maximum of two matches to go and I’m going to give it my all.”

Peru’s Diego Elias overcame Egypt’s Mazen Hesham to take third place in Group A, while the final match of the night saw Welshman Joel Makin dispatch World No.6 Tarek Momen to secure third in Group B.

“I wanted to push hard there,” said Makin.

“It’s been a bit disappointing, I lost a couple of tight ones but I still wanted to come and give a good account. I knew Tarek would be difficult, he’s so skilful. Even in that kind of match, he’s coming back at the end and making it hard. It was really open, clean and tough squash, I enjoyed it.”

The CIB PSA World Tour Finals continues tomorrow (June 25) and play starts at the Mall of Arabia at 19:00 (GMT+2). The action will be shown live on SQUASHTV as well as the channels of PSA’s broadcast partners.