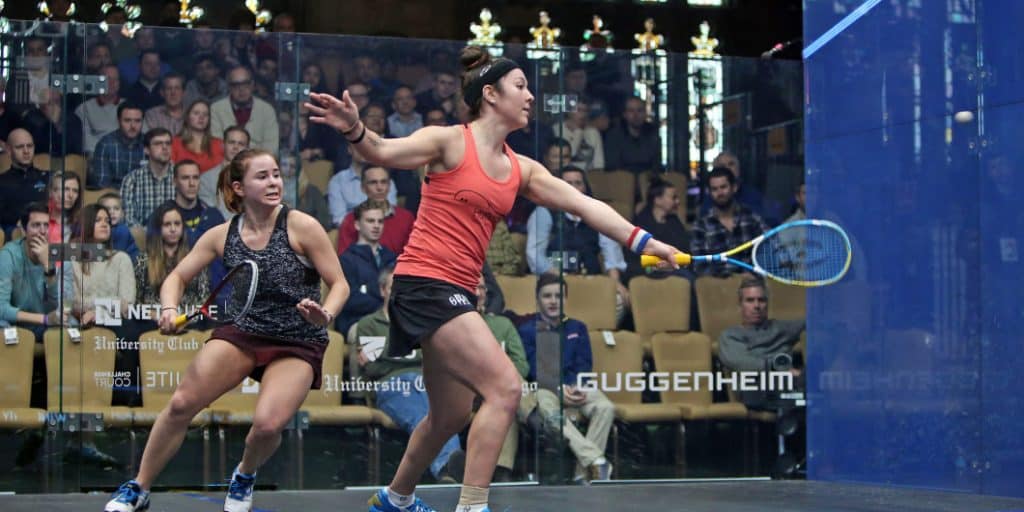 So, yesterday’s #commentsfromthecouch were cut short due to a Thunderstorm. In Egypt? Seriously! It only rains there about five days a year!

Just keeping the PSA World Tour on their toes! I’m bummed I couldn’t watch all of the matches because they turned out to be exponentially better than yesterday.

Even though I didn’t get to watch all the matches, I have provided my comments based on the match and a half that I was able to watch, along with comments on my initial reaction after seeing the rest of the scores.

Raneem bt Laura
What a way to start off the night! These two ladies set the bar for the rest of the event – and the bar is high! I don’t think it was the best we’ve seen either play but it was certainly entertaining. Raneem had lost to Laura the past few times so after she lost the first I wondered if she had a slight mental block with Laura. After all, Laura is one of the mentally toughest players on tour. Raneem was edgy to start off while Laura found her targets superbly – impressive as it was Laura’s first match on the glass. Raneem responded well by collecting herself mentally and winning the second 11-8. 1-1 Game On – and that’s when it got really exciting. Laura was all over it and at at 9-5 up, it looked like Raneem was down and out. I don’t know what happened then, but Raneem decided to string together winner after winner with some lovely backhand drop shots and cross court flicks. You could see that Raneem was getting into her groove and if Laura didn’t close out that 3rd game, there was no stopping her. And that’s exactly what happened. Raneem won the third 12-10 and keep the momentum in the 4th. It wasn’t even like Laura was playing badly. It was just that Raneem’s shots were so, so good, and like I said in yesterday’s #commentsfromthecouch, when Raneem is on, she is unstoppable. Laura just didn’t have an answer.

Fares bt Diego
We all knew that this was going to be the match of the night. Fares and Diego are both climbing the rankings and produced a few upsets in the earlier rounds. But the real question was could these two play high quality squash without it becoming a boxing match? At about 5-4 in the first Fares shanked a ball into the tin and claimed it to be good. Don’t you just love when a player appears to shank a ball in the middle of the tin and acts like it was a winner? To me it wasn’t even a questionable shot. It was just outright down. Diego was in shock because the ref called it good and Fares agreed to play a let (Looked down all the way to me, buddy). As a result, Diego lost his concentration and the game. In the second, Diego came back stronger (I’m sure he was still a little salty from the previous game) and didn’t allow Fares to bully him. Now it was Diego stepping up, taking his space and getting in front of Fares. And boy oh boy did that make Fares frustrated! I mean, you could see all over his body language how dejected he looked in that 2nd game! People, BODY LANGUAGE is a huge thing!! Don’t get me wrong, Fares hit some unreal outright winners which were beautiful, but he looked so frustrated after losing the second. Then, in the middle of an epic match, the thunderstorm in El Gouna started. It was a pity I couldn’t watch the rest of the match because the scoreline was extremely close, and I heard it became pretty contentious – with lots of raging testosterone! I’m sure they won’t be sending each other Christmas cards this year.

Camille bt Joshna
I wish I was able to see this match! Looking at the scoreline, it seemed like Joshna must have been playing out of her skin. I’m sure Joshna was much more comfortable playing on the normal courts in comparison to Camille who has been spending all her time on the glass court. It’s not easy preparing to play a match on the glass court only to be told 20min before your match that you will be playing on the normal courts. Camille and her French camp must be very relieved to get the win.

Karim bt Simon
Looking at the scores, I don’t know if you could get a more brutal three games. Nothing between the two players in the first three games. It’s always a battle coming back from 2-0 down. You have to be so mentally tough and really dig in deep to make a comeback. I think Karim just took everything out of Simon after the third game. Doesn’t look like Simon had anything left in the tank in the fourth based on the score.

Sherbini vs.Gohar
Both these players are young, hungry, and have been absolutely relentless so far this week. They should both be relatively fresh as well from cruising through their opponents. If they continue to play the way they have been playing the previous rounds, then this will be a nailbiter of a match!

Raneem vs. Camille
This is another toss up. I’m going to go with Raneem only because she’s in Egypt and she enjoys playing on this court. However, Camille has won two World Series events this season, so I’m sure she is going to give her everything to try and make her first World Championship final!

Marwan vs. Greg
Marwan played some outrageous squash against his brother on Tuesday. If he can keep playing at that same level, then he’s going to cause a lot of problems for the Frenchman

Karim vs. Fares
Hopefully Fares can call his own tins down in tonight’s match. I always have a “glass half full” outlook in life, so I have faith that he’ll play fairly in one of his matches. Let’s hope today is that day!