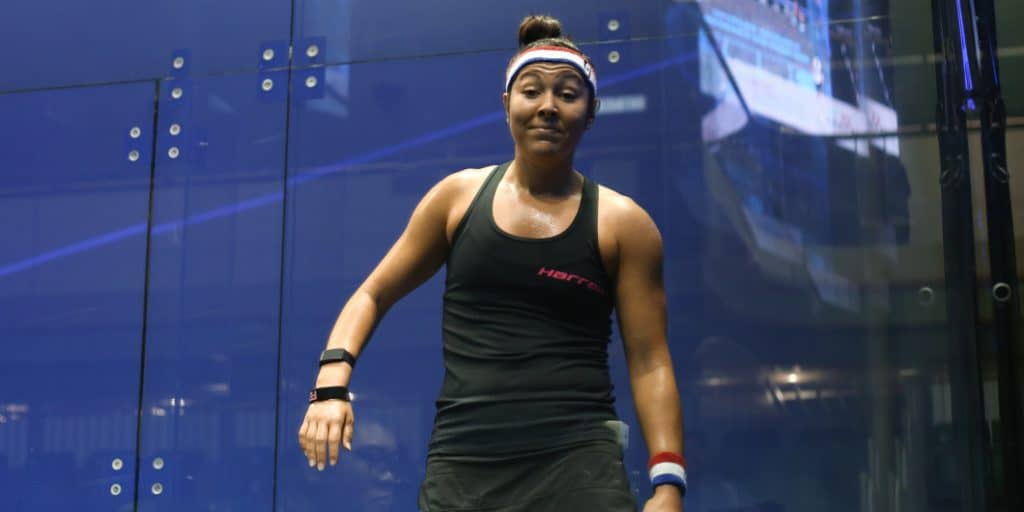 Here’s her take on all of yesterday’s action.

Given that I’m basically spending most of my days on the couch with my foot elevated, I thought I’d share my thoughts on the action with some #commentsfromthecouch

Apologies in advance for my bluntness, but as most of you already know, sugar coating things is not really my forte. I just tell it how it is. With that being said, I hope you enjoy my comments on yesterday’s matches!

Nour El Sherbini v Tesni Evans
Unfortunately I missed most of this match because I was at brunch – which is what every American is known for doing on a Sunday. Looking at the scoreline it seems that El Sherbini is pretty confident at the moment. Tez has been playing well this season and causing serious trouble for the top players (I’m not ashamed to admit I’m one of them) so for Sherbini to score a 3-0 win over her is a sign that her game all coming together nicely this week – at just the right time!

Mohamed ElShorbagy v Mohamed Abouelghar
After watching the first game I definitely would not have pegged this one to go all the way to11-9 in the fifth – it ended up being seriously tight. First off, you can only appreciate the (multiple) outrageous winners from Abouelghar during that match – when his shots are on, he is unreal! If he had started the match the way that he was playing from 2-0 down, I think it could have been different. But there were too many errors from him in the beginning and he left himself in a rather large hole. But you have to give credit to ElShorbagy – to come back and win that fifth game, when al the momentum was with Abouelghar, is a sign of a winner.

Nouran Gohar v Nour El Tayeb
These two normally kill each other out there for five-games so I was expecting their match today to be of a similar vein. But Gohar’s game worked so well in those conditions – she was the one hitting with purpose and using her pace to hit through to the back of the court and that made the difference. Nour played really well in stages – mixing up the pace and breaking the rhythm – but Gohar was just too strong in the end.

Gregory Gaultier v Mazen Hesham
It’s great to see Mazen back playing after so long out with injury – for me, seeing him come back helps me know that I can as well. Mazen had some moments of trademark brilliance but Greg is probably the worst person possible to play at the moment. He knows how to absolutely annihilate you and leave you feeling extremely demoralized. He is simply picking up right where he left off in Hull and steamrolling through everybody he plays – it is completely absurd the level of squash he is playing, especially given his age, he is just way too strong at the moment.

Looking ahead to today’s action, there are a host of tasty matches on both the glass and tradiitonal courts.

Joelle King v Laura Massaro
It’s a bummer this one isn’t on the glass court because this has the potential to be a very tough match. Obviously, Laura is the one in form given her recent British Open win, but Joelle is my fellow torn achilles sister and a tough competitor – it could go down to the wire.

Cesar Salazar v Diego Elias
This will definitely be a good match to watch for the fans. Diego is playing well and on form after beating Farag 3-0 so it will be interesting to see if he can up the momentum.

Simon Rösner v Karim Ali Fathi
I haven’t really seen Karim play before but I have seen Simon play my money will be on the Tree-Chopper.

Raneem El Welily v Olivia Blatchford
USA!, USA!! I’m so happy that Liv won her first round match and made it into the second round. Obviously, I am all about the red, white, and blue, so I wish the very best for my teammate against Raneem. Raneem is a very tough player and unbelievably talented, so it will be interesting to see how Liv copes with Raneem’s game and these glass court conditions.

Camille Serme v Emily Whitlock
Camille has been in such good form this season, so it’s hard to see past her. But Emily had a good win at the British over Alison Waters – so it may not be that onesided.

Fares Dessouki v Ryan Cuskelly
This should be a good match and hopefully a clean-ish one as well (we can all hope, right?) Fares is playing well and comes off the back of a big win over Nick Matthew – who also has been in great form – but Cusk is a very tough player and not one to write off. After all, he is coached by Rod Martin and I’ve heard how brutal his Elliptical sessions are!

Borja Golan v Karim Abdel Gawad
This is a really tough second round for Karim since Borja has been playing well the past couple of tournaments. However, Karim is just such a silky smooth player and he’s deadly on both the backhand drop and volley drop which makes him an absolute nightmare for his opponents. I’m glad I never have to be one of them!