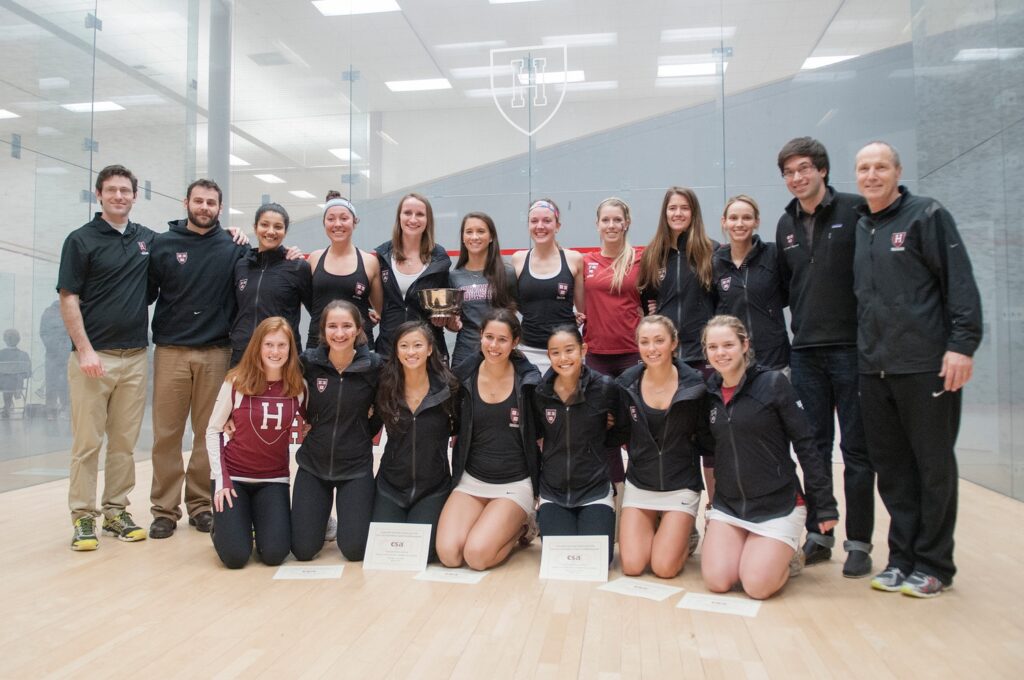 Although the three former Crimson athletes have all found immense success on the pro circuit, they have taken different paths to reach that success.

From the beginning of her time at Harvard, Amanda Sobhy knew that she wanted to pursue a career in professional squash. She strove to balance her ambition to play pro squash with her desire for a quality college education.

“I always knew I wanted to be a full-time pro after graduating Harvard,” wrote Amanda Sobhy in an email to The Crimson. “When I first started Harvard in 2011, there was still a stigma around being a college athlete and not taking your pro career seriously. A lot of people thought that, because I chose the college route instead of going full time on the pro tour at 18, then my squash was going to drop, and I wouldn’t improve.”

“Of course, I wanted to prove those people wrong and show that you can get a great education and still be able to improve your squash and do well on the pro tour after graduating,” Amanda Sobhy added.

On the other hand, Mendez and Sabrina Sobhy did not decide to pursue professional squash full time until the later years of their time at Harvard. Mendez, who was a pre-med student at Harvard, originally planned to play on the PSA World Tour for one or two years before attending medical school. However, while rehabbing a torn ACL during her senior spring, she realized she wanted to make a career out of squash instead of medicine.

“I initially thought that I would sort of only play for a couple of years and then go to medical school,” Mendez said. “[Tearing my ACL] sort of derailed all my plans to go pro straight away. And I ended up spending a year full-time rehabbing before I could join the tour. And then, in that time, I sort of decided I didn’t love medicine as much as I thought I should to go to medical school. So even though I had finished pre-med, and I took the MCAT, I decided to let that expire and keep playing squash.”

Similar to Mendez, Sabrina Sobhy was fairly certain that she would not pursue a full-time career in squash until her senior year at Harvard. According to Sabrina Sobhy, she was a bit worn out from squash heading into college. However, she rediscovered her love for the sport while playing on the Harvard women’s squad.

“I was pretty much dead set on not going pro because I think, going into college, I was burnt out of squash,” Sabrina Sobhy said. “And then, throughout my time at school, I definitely shifted much more towards more enjoyment. The love for the game was reignited inside of me, [by] Harvard squash and my wonderful teammates and the community there.”

“But it probably wasn’t until the beginning of my senior year where I kind of was like, ‘Alright, well, you’ve got to start thinking about what you want to do after college.’ And I wasn’t entirely ready to stop squash,” Sabrina Sobhy added.

As the three former Crimson athletes have embarked on their journeys on the PSA World Tour, they have found adjusting to life as a pro athlete thrilling, tiring, and everything in between. According to Sabrina Sobhy, when she made her first foray into full-time squash, the physically demanding lifestyle and lack of teammates for support caught her by surprise.

“Something that surprised me tremendously was just kind of the exhaustion of traveling every few weeks, on top of training,” Sabrina Sobhy said. “And then, of course, [at Harvard] you had your team there to kind of bring the energy and bring the support and give you a really positive reason for performing and competing, which the pro life doesn’t have.”

However, Sabrina Sobhy credits the difficulty of this transition with helping her discover the importance of staying motivated, even if the motivation had to come from within.

“No matter how exhausted you are, from traveling, training, whatever it is, you’re your sole motivator,” Sabrina Sobhy said. “It was a bit eye-opening just to kind of figure out that true sense of motivation and reasoning behind competing and traveling — in the beginning, for me, at least.”

Mendez also found the transition to full-time pro squash to be intensely demanding physically but enjoys the rigor and fast-paced lifestyle of being a pro athlete.

“I traveled quite a bit as a junior and then obviously trained as much as I could at Harvard,” Mendez said. “But it definitely took me sort of a couple of years to get adjusted to life as a full-time pro and what it entails. But it’s super, super exciting. I get to travel the world to play squash and call it my job. So I count myself lucky.”

Like many athletes, professional squash players were hit hard by the Covid-19 pandemic, with access to squash courts and workout equipment heavily restricted during the initial outbreak last March. However, Amanda Sobhy, Mendez, and Sabrina Sobhy all found ways of staying motivated and keeping themselves busy during this turbulent period. The Sobhy sisters, who did not have access to a squash court, tackled endeavors that complemented their squash play, such as virtual squash instruction and other forms of exercise.

“I actually took some time off during the pandemic and didn’t play squash for about two months. I still worked out, but I wanted to work on other things that would complement my squash without having me on a squash court,” Amanda Sobhy wrote. “I also was doing a ton of virtual teaching for junior squash kids and also Squash & Education Alliance, which kept me engaged in the community and super busy.”

Mendez, who fortunately had access to a squash court during quarantine but no one to play with, focused on solo practice and improvised by having her family members help her out with training.

“I was lucky — I always had access to a squash court,” Mendez said. “But I didn’t necessarily have people to play with for long periods. So it was a lot of solo practice, or, I would have my dad or my sister, who are not squash players, throw balls up for me with their hands.”

It comes as little surprise that Harvard’s women’s team has produced three players currently in the top 50. The team has won six straight national championships, a streak that dates back to the final year of Amanda Sobhy and Mendez’s time at Harvard. Perhaps another athlete from the star-studded Crimson squad will join them in the top 50 sooner rather than later.

Note: At the time of writing, Amanda Sobhy (world ranking: 5) and Haley Mendez (world ranking: 42) are competing at the El Gouna Open in Egypt. Their rankings are subject to change as the season progresses.

Originally Published on: The Crimson