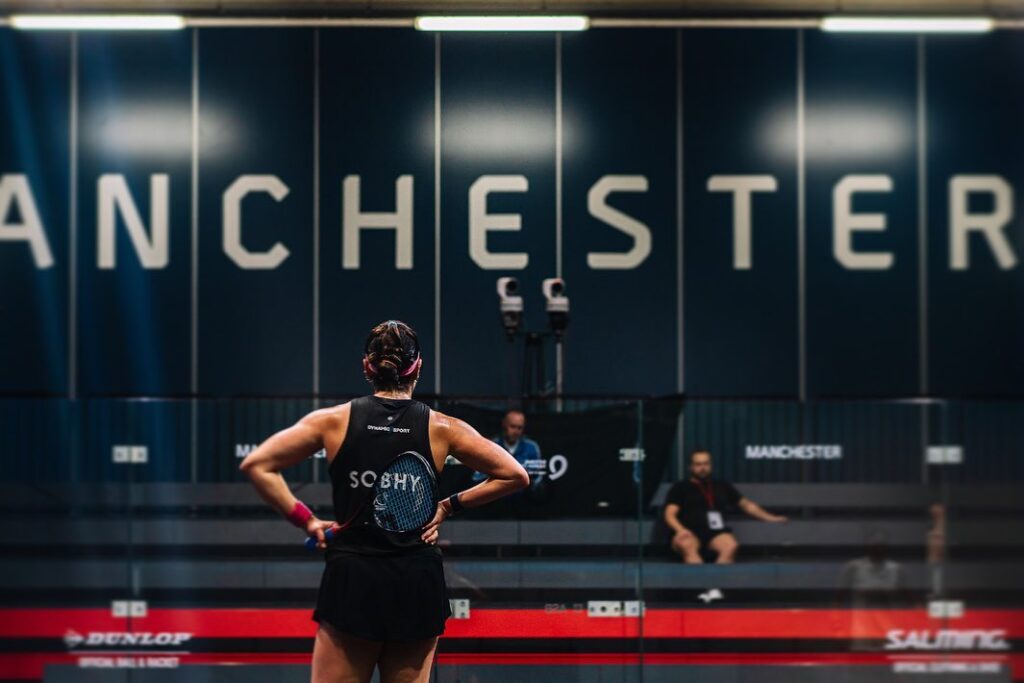 Now that the first Professional Squash Tournament has wrapped up, I thought it would be fun to give you a little insight on what the new “normal” is like for a professional squash player competing in a tournament, during the Covid era. Let’s begin, shall we?

I was scheduled to fly to Manchester, England, on September 13th. Due to the fact that I had to book my flight so late, my flight route was from Philly, to Chicago, to Dublin, and finally to Manchester. In order to fly internationally, and to be able to compete in the tournament, I had to get travel insurance that fit the guidelines set by PSA (Professional Squash Association). I was also required to take a Covid test within 3 days before flying, and I had to fill out a UK Passenger Locator within 48 hours of flying. On my end, everything was set. I had my rapid Covid test on Friday, I bought Travel Insurance for my flight, and I filled out my UK Locator form. I printed out everything too, just to be safe incase customs wanted to see hard copies. Turns out, customs didn’t even ask to see anything! In fact, it was an unbelievably easy trip all around. All of my flights were relatively empty so I had the whole row to myself. I was never even asked any questions other than why I was flying to Manchester. The best part of the trip was that I got to meet up with my sister, Sabrina, in Dublin. The worst part about the trip was wearing a mask the entire time and the freezing air blasting from the plane vents!

Upon arriving in Manchester that Monday morning, Sabrina and I were met by one of the driver’s from the tournament (shoutout to the drivers for being awesome throughout the entire event!). He took us straight to the tournament hotel. Since we were both coming from a non-exempt country, we had to be isolated in our hotel room for the day until we took another Covid test, which was administered by PSA on Tuesday morning. It was only when the negative Covid tests results came back, that we were allowed to enter the PSA “tournament bubble.”

In the bubble we were allowed to be in three locations: our hotel room, a conference room in the hotel called The Piccadilly room (which was used as a socially distant communal room), and the venue. The only time we were able to go to the venue was when we had our match. We were only allowed to practice with our first round opponent (or hit solo) for 45 min the day before the first round started, but apart from that, the only times we left the hotel was for our match. Yep, you heard that correctly. No practicing on rest days or in the morning before our match! We were driven to the venue with our opponent (in the private transport) an hour before our match. Once at the courts, we had an allocated side court to warm up on, then we competed, cooled down, and immediately got driven back to the hotel. If you didn’t have a match, you didn’t leave the hotel. Talk about cabin fever!! What do you do isolated in the hotel? Hotel room workouts, lots of Netflix (I’m currently binge watching New Girl), reading, tons of recovery, catching up with friends six feet apart in the Piccadilly room, and loads of time on our own. I was living my best introverted life. Even though we were very restricted in what we could do, our risk of getting Covid was extremely low and we were all in the same boat regarding the rules. There were no spectators, no coaches, no one to speak to us between games, no individual support systems, no wiping our hands on the walls, and definitely no going outside the bubble. It was a true testament to how well we could cope with being on our own.

As squash players, we are taught to adapt quickly during a match. Now we had to adapt both on and off the court. We had to make do with what we were given and that’s exactly what we did! After six months off, I found the quality of squash pretty high and we fought like hell even though

there was no one in the crowd to watch us. The main thing is that we all enjoyed competing again! At the end of the day, PSA was able to put on a very successful tournament during a global pandemic, so hats off to them! No one caught the virus, we got tested every four days, everybody followed the rules, and we were able to get back to doing what we love!

Ladies and gentleman, SQUASH IS BACK!!