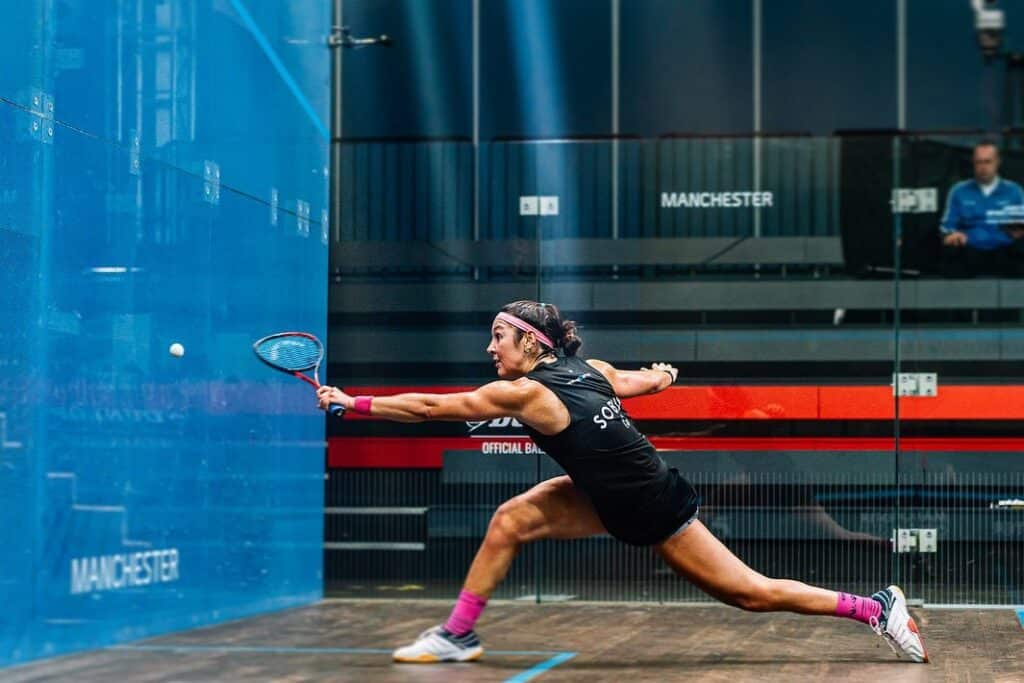 After spending a month away, with a little over two weeks in Egypt, I am finally back in my apartment in Philadelphia! The Egyptian Open finished a little over a week ago, but I’ve actually been home for nearly two weeks. For those of you doing the math, my arrival back to the states was earlier than expected. Unfortunately I lost my first round 12-10 in the fifth, squandering away two match balls. Tough on my fans and even tougher on me. Come to think of it, I only won one match in the two tournaments I competed in, in Egypt. Sadly, not the best record for me so let’s just say that I am happy to put all of that behind me and to be back in Philly. As far as my blog update? I realize that I’m quite late to the party, but better late than never, right? So, here’s the scoop.

Competing in Egypt was a lot different than the first tournament held in Manchester, England. First of all, in Egypt, the general public was a little bit relaxed about the existence of COVID, and the importance of wearing a mask. When I arrived there, and stepped out into the “clean, crisp Cairo air”, my Dad told me that I didn’t need to wear a mask. He reasoned that breathing in my own carbon monoxide was bad for my lungs! Ummmm, hellllooooo… I think catching COVID would be way worse for my lungs than breathing in my own rancid plane breath! The mask stays on when in public, thank you very much.

The main difference between competing in Manchester vs. competing in Egypt was that Egyptian fans were allowed to come and watch the tournament. Talk about added anxiety to an already stressful situation! Instead of focusing on keeping safe in the bubble, we (PSA and all of the players) now had to deal with keeping locals OUT of the bubble, and keeping us IN the bubble. I had to be extra cautious abiding by the rules, on top of which I then had to be mindful about who I was in contact with and what they were doing! As relaxed as Egypt might have been, in either not wearing a mask, or wearing it under their nose (cough cough, Dad), the actual COVID tests were much more aggressive in Egypt than the ones I took in England and even the ones I took in the USA. I swear, those Egyptian testers were trying to scratch my brain through my nostrils! After 8 COVID tests (in the span of a month), I can safely report that my nostrils have been severely violated. I am also happy to report that I have tested negative in all of the tests.

The World Tour Finals was the first of the Egyptian tournaments that I competed in and “bubble life” was much more laid back. This was due to the fact that PSA only had to worry about 16 players in total, as compared to the 96 players competing in The Egyptian Open. Talk about a drastic difference! In both events, we had sectioned off outdoor areas for the players where we would eat, chill out, lay by the pool, and soak in the glorious Egyptian sunshine. Our hotel rooms also had a balcony, which was huge!! If you’re stuck in a bubble, having access to fresh air and the outdoors does wonders for one’s mental health and sanity. One downside to the bubble though, was the lack of access to food. In Manchester, food delivery services were extremely accessible but in Egypt, we could only eat from the hotel. The food at The Egyptian Open was pretty decent since we were staying at The Mena House Hotel which was acquired by Marriott a couple years ago. Pricey, but the food was good. The food during the World Tour Finals? Not so great. Let me start off by saying that we were all staying at The Novotel. For breakfast, we would fill out a sheet saying what we would like to be delivered to our room. For the entire week, I don’t think any player got the correct order. Egg choices were always wrong, often accompanied by some very questionable looking brown paste. Pastry baskets were the new toast, and we were always given some carton of juice that no one asked for. It was a very sad meal to start the day! Haha. However, both the lunch and the dinner meals were very consistent. In fact, too consistent! By the end of the week I was so tapped out from eating endless amounts of Shish Tawook (chicken kebab), rice, and veggies. Fortunately, I stocked up on a lot of groceries before entering the bubble, so I had other food supplies. Since the players were all in the same boat, it gave us something to bond over and we had a lot of laughs about our meals!

Once we all moved over to The Egyptian Open hotel, we experienced a major upgrade. The Mena House had been renovated in the last few years, so having our room with a balcony that overlooked the pyramids was something spectacular. Sadly, it was a very short lived experience for me. The only plus side to going home early was that I missed out on all the Egyptian weddings that were happening on the grounds of the hotel. First off, I don’t even know why large weddings are happening during a pandemic. Secondly, I think we all went deaf from the unbelievably loud music blasting every night for hours. For the couple of nights that I actually stayed in the hotel, I went to bed listening to music with my noise cancelling airpods on (Shoutout to the Apple airpods for being amazing).

Apart from some things that were out of our control, PSA and the tournament directors did a fantastic job putting on world class tournaments during a global pandemic. Besides the 96 players competing in the Egyptian Open, the staff, the referees and the physios all managed to stay safe in the bubble. Perhaps PSA felt like it was the largest day care ever, but they managed to keep us all safe. Kudos to PSA! Once again we were able to compete which is what we want to do! It is truly a team effort from everyone. As for my own performances, I’m definitely disappointed, but people always say that you learn the most from your losses. Let’s just say I learned a lot! Hopefully I’m still number one in your hearts!! 🙂

Signing off for now!