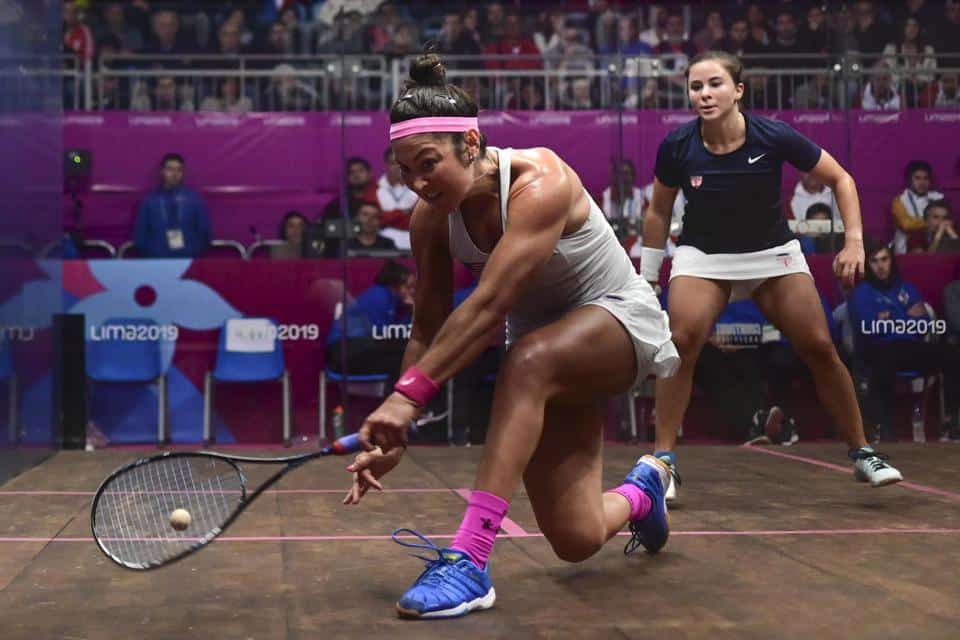 As a senior in high school in 2011, Amanda Sobhy was among the roughly six percent of applicants accepted to Harvard University. It was the culmination of her hard work in the classroom and on the squash court, where she was the reigning junior world champion. She knew an Ivy League degree would put her in an enviable position, no matter what she chose to pursue later on.

Still, Sobhy heard from several high-level people in the squash community who said going to Harvard would hinder her squash dreams. No squash player at the time had attended college full-time and then been a top-10 professional. The best players became touring pros as teenagers and were singularly focused on the sport, traveling the world throughout the year for tournaments and practicing or training several hours each day. Sobhy briefly considered following that path and skipping college, but that thought didn’t last long. Her parents, both former squash players, had always told her education came first.

“My competitive nature was just like, ‘Oh, no one has ever done this before? Let me just show you guys’,” Sobhy said. “It was like, ‘I’ll prove to you it’s doable.’”

Sobhy, who turned 26 in June, has shown that, yes, it is indeed possible to complete college and remain among the world’s best players. She graduated from Harvard in 2015 after compiling a 62-0 record against college competition and playing some pro tournaments. And she is now eighth in the Professional Squash Association world rankings. No other man or woman in U.S. history has ranked among the top 10.

On Thursday, Sobhy faces Sivasangari Subramaniam of Malaysia in the first round of the PSA Women’s World Championships in Cairo, Egypt, the year’s biggest event. Subramaniam, a sophomore at Cornell University, is one of several top young players who have followed in Sobhy’s footsteps and decided to play in college.

Sobhy, who is one of just five U.S. players in the 64-women field, has been nursing an adductor injury since last month and isn’t fully healthy. But despite the minor setback, she is simply happy to be back playing the sport she’s loved since picking up a racket when she was 11.

Two years ago, Sobhy was wondering if she would ever compete in a professional event again. In March 2017, during the semifinals of a tournament in Colombia in which she was the No. 1 seed, Sobhy was one point from defeating fellow American Olivia Blatchford Clyne. Sobhy, who was a career-best sixth in the world rankings, stepped back to get out of Blatchford’s way and collapsed to the court.

At first, Sobhy thought Blatchford Clyne had hit her on the back of the leg, but that wasn’t the case. Sobhy had ruptured the Achilles tendon in her left leg in a freakish, non-contact accident. Medical personnel rushed on the court and carted Sobhy off on a stretcher and into an ambulance. But because the tournament was held on top of a mountain and it had been raining, the drive to the hospital took an hour. Doctors then attended to Sobhy, giving her painkillers and fitting her with crutches. She flew home to New York and underwent successful surgery a few days later, but she knew she had a lot of work ahead.

“I would definitely say it makes for a good story, but it was not ideal,” Sobhy said. “To have such a momentum-crusher at a very young age, when I was making a breakthrough on the pro tour, it was definitely tough.”

Sobhy spent the next several months rehabilitating the injury, eventually gaining enough strength to walk. But she didn’t see much progress until she moved to Philadelphia that October and began working with trainer Joe Zarett, who had helped numerous athletes such as boxer Bernard Hopkins and tennis great Pete Sampras return to prominence. After two weeks with Zarett, Sobhy was able to play squash again.

“He pretty much brought me back to life,” Sobhy said.

Still, Sobhy was cautious and didn’t want to rush back. In January 2018, she returned to the PSA World Tour at the prestigious JPMorgan Tournament of Champions at Manhattan’s Grand Central Station. She won her first match before losing in the next round.

Sobhy showed she was close to her old self last April when she lost to then No. 1-ranked and three-time world champion Nour El Sherbini of Egypt in five games. Six months later, at the U.S. Open Squash Championships, Sobhy knocked off No. 3-ranked Nour El Tayeb of Egypt.

In February, Sobhy returned to the top 10 of the world rankings, and she has continued to improve during the past few months.

“I would say I’m better than I was before my injury,” she said. “With all of that time off, I got to start over with a clean slate and build from the ground up.”

She added: “It was almost like I got a second chance to have a do-over and try and do everything properly.”

Sobhy, who now lives and trains in Boston, is as committed to the sport as ever. She is surrounded by a group of people she calls the “A Team” whom she works with on all aspects of her game. They include longtime coach Thierry Lincou, a former No. 1-ranked player on the PSA men’s tour; fitness trainer Micah Logan; nutritionist Nyree Dardarian; massage therapist Colleen Carney; and mental coach Amy Gross, a former star squash player at Yale University who has a masters degree in professional counseling and psychology from the University of Pennsylvania.

“It’s always tough to recover from an injury because there’s a lot of uncertainty in terms of, ‘When am I going to come back?,’” said Gross, who has worked with Sobhy since the spring of 2016. “There’s fear of re-injury, as well. Even when you physically recover, those things can linger for quite some time. She really exhibited quite a lot of resilience and maintained an optimistic outlook.”

Said Lincou: “She’s such a good and enjoyable person to be around. She’s pretty much always in a good mood, ready to smile, ready to crack a joke.”

After this week’s World Championships, Sobhy will have several weeks to rest before the PSA World Tour resumes in early January for the JPMorgan Tournament of Champions at Grand Central Station. She is looking forward to taking some time off and preparing for the 2020 season.

If all goes well and she can remain healthy, Sobhy hopes to compete professionally for another decade. She’s not exactly sure what she’d like to do when her full-time playing days are over, although she’s considered coaching squash or marketing the sport to a wider audience in the U.S. When the time does come to call it a career, she’s grateful she has a Harvard education to fall back on. She wouldn’t trade her four years in college for anything.

“I’m glad that I went there,” Sobhy said. “The whole experience, and just being able to say you went to a University like Harvard, there’s really nothing that can compare to that. I’ll always have that. I can always say I’m a Harvard graduate.”