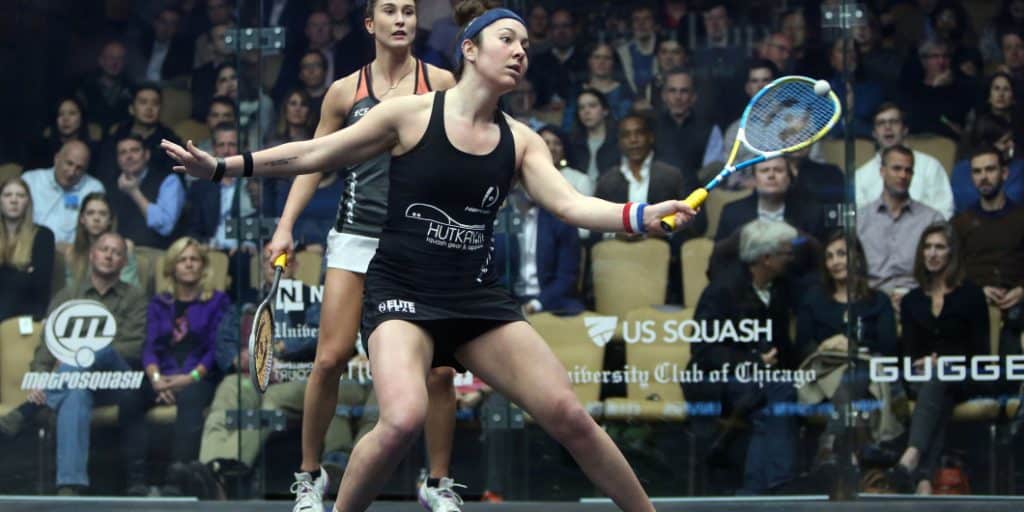 Here’s her take on all of yesterday’s action as the quarter-finals finished up in a dramatic day!

What an excitingly long day of watching squash! Truly these matches were a treat to watch. First off, thank you Mother Nature for not raining again. Secondly, last night showcased such a high level of squash – it was fantastic to watch.

I love semi-final day as a spectator because you get the quality of squash that you would see in a final, but instead of only watching one match, you get to watch two! In this case, because it’s a joint men and women’s tournament, we got double the fun!

Obviously, I would have loved to have been there competing, but here are my comments on semi-finals night!

Greg bt Marwan
Greg was just too good tonight. I’m not even going to say anything bad about Marwan because he really couldn’t do much – Greg was so impressive. It’s remarkable. The closest the match got was in the first which Greg won 12-10. It was a nervy start for Marwan as he went down 6-0 quickly – I thought Greg was on bagel hunt! But in a blink of an eye, Marwan tied it up 6-6.
Greg’s accuracy completely went out the window, his head was somewhere else, and all his shots were loose and in the middle of the court. Marwan finally relaxed and was finding his targets nicely and had opportunities to win rallies but clipped the top of the tin to lose the first. After that, it was all about Greg. He came back looking much more relaxed and at ease. He varied his shots and pace beautifully and made Marwan do a ton of work. I’m sure he’ll be feeling that tomorrow!
Greg was always ahead in the last two games with Marwan pulling out every move in the book to buy himself time, catch his breath, and break up Gaultier’s rhythm, but it wasn’t enough. Gaultier was in the zone – moving like a dream, unbelievably accurate, and hitting winners left and right. As if that wasn’t demoralizing enough, Greg won the match by drilling Marwan in the back with the ball. Poor guy. Rough night for him. However, don’t you love Gaultier’s post match dance celebrations? It’s something I look forward to nowadays after he wins.

Karim bt Fares
Am I the only one who had no idea Karim would become the new World No.1 come May 1st if he won this match? No wonder he looked so relieved after winning! After all, Fares came out of the blocks firing, I was impressed with how he played. You couldn’t have gotten a more perfect game first game from Fares – so much confidence in his shots and moving onto the ball so quickly. Karim responded nicely in the second game and changed up his tactics to slow down the pace and take away Fares’s weapons, which worked brilliantly. The third was make or break and Fares will be disappointed after losing multiple game balls. He let Karim back into the game – both were playing at a ridiculously fast pace and hit some unreal winners, especially in the backhand front corner, but it was Karim who came out on top in the end. Massive congratulations to Karim for putting on a class performance.

Sherbini bt Nouran
Joey Barrington has been calling Nouran “The Terminator” for the relentless pace she’s been playing throughout this tournament. I think that name suits her perfectly. She has been demolishing her opponents left and right and so I was completely shocked when Sherbini went 2-0 up in about 20 minutes. Sherbini was on another level – she mixed up the pace with beautiful holds and backhand drops, and never allowed Gohar to get into the metronomic rhythm that she loves. At 10-8 up in the 3rd game, I thought it was all over for Nouran. I was dead wrong. That girl is a fighter and turned up the dial to save 5 match balls and win the 3rd game 15-13 on a Sherbini tin. Gohar just ripped winner and winner with her forehand and backhand kills, and her boasts. It was some gutsy stuff. The fourth was nip and tuck all the way through at an unbelievably fast pace and high tempo. Gohar was hitting sublime winners towards the business end of the game to bring it to 9-9, but with a rare tin on a backhand kill followed by a winner from Sherbini, it was Sherbini’s win. Let me tell you, the women’s game has completely stepped it up since the change in the lower tin, and are now playing attacking fast paced squash. It’s such a treat to watch while injured.

Raneem bt Camille
Another fantastic match to end the night. I’m sure Camille was feeling the effects of yesterday’s late night match on the normal courts. It was a very fair and clean match between the two, which allowed for the squash to shine through. Raneem dominated the first game being the player in control and making Camille do a ton of work (this is why we do ghosting during training), but Camille returned the favour by taking the second game. She was the one putting in some beautiful volley drops and cross court flicks and the third could have gone either way – it was so close. There was some great squash being showcased by the two ladies with variety in shots, height, and pace, but Raneem took the game 12-10. Raneem was cool, calm, collected and on a roll and Camille couldn’t find an answer. It was a good day in the office for Raneem and Egypt.

Greg vs. Karim
These two players are arguably the best players on Tour at the moment. You have the final between the current World #1 and next month’s World #1. It can’t get any better than this! Can Karim channel his inner baby-faced assassin or will Greg do another victory dance? Neither player haswon this event yet, so I’m sure they will be giving everything they have to win the title!

Sherbini vs. Raneem
Wow – tough one. One thing I am certain about- There will be an Egypt World Champion! 🙂