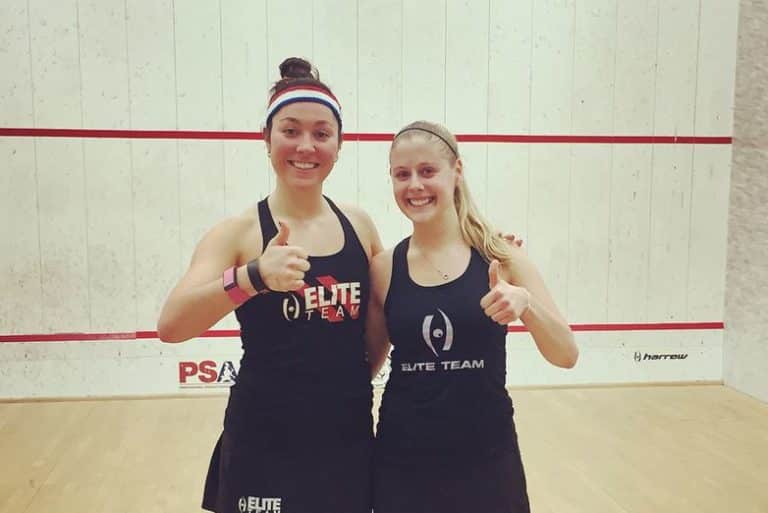 Nine months to the weekend after rupturing her Achilles tendon, Amanda Sobhy was back on court playing competitive squash in the WSDA Briggs Cup at the Apawamis Club in Rye, New York.

Sobhy gave plenty of credit to her Canadian teammate, Todd.

“Nikki actually had to become a WSDA member in order to play in Briggs Cup because she never played an event before,” Sobhy said. “She has played doubles up in Canada quite a bit, so I knew she would be great despite not playing a tournament before. Even though we were last seeds, we weren’t worried and just went into every match having fun and enjoying ourselves. Nikki is very quick and is always smiling and laughing, so she was a great partner to have. She was the speed and I was the power. It was our first time playing doubles together, but we were great partners and communicated really well from the beginning, which is key in doubles. Plus we are friends on the singles tour, so it worked out great. We are already planning to play together in the next doubles tournament we’re both available for. It’s such a fun addition to singles.”

The twenty-four-year-old from Sea Cliff, New York, was ranked as high as world No. 6 on the PSA Tour last season before her injury, and admitted it was a relief to be back on court again, even if a doubles court for now.

“It was actually my nine month anniversary since rupturing my Achilles this past weekend,” Sobhy said. “Going into the tournament, I was quite hesitant and nervous because I didn’t know how my body would react and I didn’t want to injure any other parts of my body. However, as each match progressed, I got a lot more comfortable and confident in my movement. By the finals, I felt really great and back to my old competitive self. It was honestly such an amazing feeling to be back competing at a professional level again!”

The Harvard graduate is slated to compete on home turf in the WSDA Boston Open next month before making a proper return to the PSA Tour at the Tournament of Champions in New York City.

“It has been an unbelievably long journey to get back to this level and it took an entire village of people to help me get here, which I am forever grateful for,” Sobhy said. “I am just extremely pleased that I can move and compete again close to the level I was before I got injured. I’ll be spending the next five weeks continuing my training in Boston and Philly to prepare for the Tournament of Champions in January, which will be my first tournament back on the PSA world tour!”