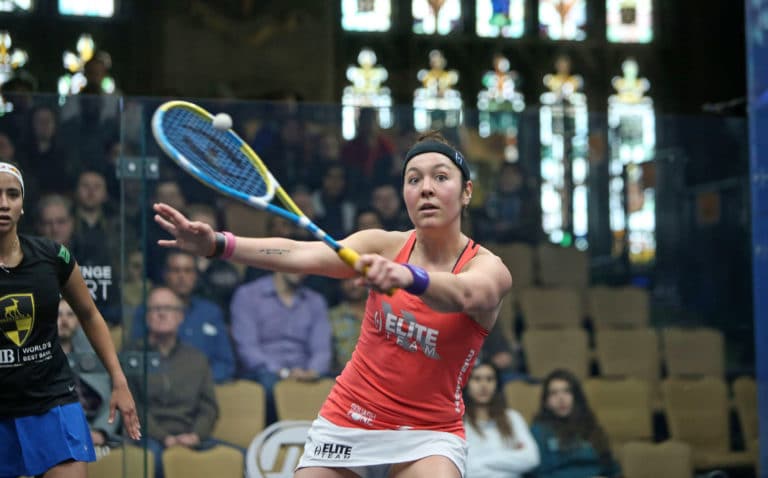 Team USA’s Amanda Sobhy pulled off her most significant result since returning from a ten-month injury hiatus, upsetting world No. 6 Nouran Gohar to reach the quarterfinals of the 2018 Windy City Open presented by the Walter Family and Equitrust Sunday at the University Club of Chicago.

The Windy City Open is Sobhy’s third tournament of 2018 following her first appearance back from injury at the 2018 J.P. Morgan Tournament of Champions last month.

“It’s been such a long journey,” said an emotional Sobhy following her win. “I know I came back at ToC but I really had my eye set on this tournament. I really wanted to prove to myself that I’ve got this and told my coaches that I wanted to go on my own to do it by myself. I wanted to prove to myself that I’ve come all this way and I’ve fought back from injury and I can still beat the top people.”

Sobhy, a US Squash Elite Athlete Program player, sustained a ruptured Achilles nearly a year ago while ranked world No. 6, but has dropped to world No. 30 following ten months off the court.

“The fact that I’ve come so far and gone through so much and built myself back up from the ground and got this win against a top six player, I’m really happy,” Sobhy said. “I have a massive team around me and it has been a major team effort—I couldn’t have done it without all of their help and support. It has been a long process, but they have stuck by me and I can’t thank them enough.”

“If there was ever a tournament to win then this would be a good one,” Sobhy said. “I love Chicago—being the home girl is awesome and having everyone’s support.”

Originally Posted on: US Squash