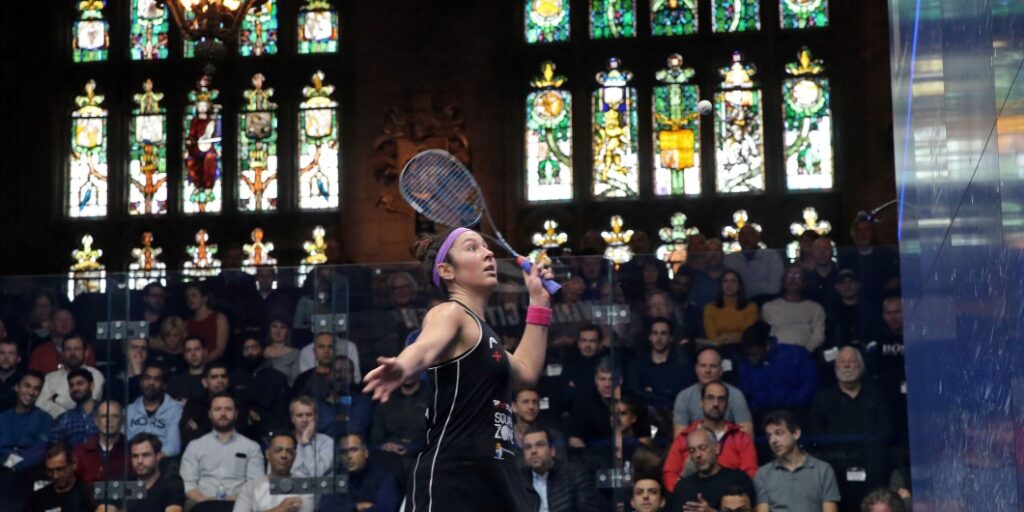 Sobhy: Reaching The Top 6 Again Would Be An “Unbelievable Feeling”

March 10, 2017. That was the day that US No.1 Amanda Sobhy ruptured her Achilles tendon during her semi-final clash with compatriot Olivia Blatchford Clyne at the Ciudad de Floridablanca.

After spending almost an entire year away from the game, and falling away from her World No.6 spot, the best of her career to date, Sobhy returned at the Tournament of Champions in 2018.

Since then, she has fought her way back up the World Rankings, and following the retirement of former World No.1 Raneem El Welily, the American is now just one place shy of her career best World No.6, but she wants more.

“It would be an unbelievable feeling to get back up to my highest of World No.6 because I want to prove to myself and to people that you can get back to a top level after coming back from a major injury,” she explained.

“However, I want to surpass my previous career high of No.6 and break into the top five. Top five in the rankings sounds a whole lot better than No.6, No.7 or No.8.”

Despite the run back into the top ten to World No.7, Sobhy is not entirely happy with her 2019/20 campaign, due to inconsistency from tournament to tournament.

She reached the quarter-finals of three of the four Platinum events, along with a runners-up finish at the season-opening Open de France – Nantes presented by Tailor Capital.

Sobhy celebrates after winning her semi-final match in Nantes

However, the US No.1 also fell in the first round of the CIB PSA Women’s World Championships, losing to the unseeded Sivasangari Subramanium. That was followed by a last 32 defeat to Emily Whitlock at the Tournament of Champions.

“It’s been a pretty weird season for me because I feel like I’ve had some of my best performances, but I have also had some of my worst too,” Sobhy admitted.

“In general, I think it was way too inconsistent for my liking, whether it was struggling with niggling injuries, loss of motivation, or extended time off.

“However, reaching the finals of Nantes back in September & winning in Cincinnati in February were two of my best performances, so I can’t be too disappointed in the season. I also was able to reach the quarters of a few Platinum events too, which is always nice.”

The aforementioned Bahl and Gaynor Cincinnati Cup saw Sobhy pick up the 17th title of her professional career after defeating Nele Gilis, Hania El Hammamy and Sarah-Jane Perry en route to the crown.

The American dropped just two games throughout the entire tournament, with a comfortable 3-1 victory over English No.1 Perry in the final in February.

“My performance in Cincinnati was probably my best an most consistent performance this season,” she explained.

Sobhy with the Cincinnati Cup trophy

“I was coming off of some of my worst results in January and struggling with a major loss in motivation, but I think with every tough time you have, it gives you a chance to reassess things, learn, and then grow as a person.

“Going into Cincinnati, I put in a really good three week training block with my team, I was excited to compete again and I was genuinely really happy with life. I think that combination for me allowed me to play my best squash that week.”

However, the US No.1 has only reached the semi-finals of a major event once since her return, doing so at the 2019 El Gouna International Squash Open, but she knows what is required to push on to that next level.

“For myself, I think building up the overall endurance in the physical and mental aspect will help me break through to that next level,” Sobhy said.

“Also, I am consistent when it comes to getting to the quarters, but quarters and onwards is a whole other ballgame which I need to be even more consistent with.

“At that top level, you can’t afford to make any silly errors or check out for a few points. You’ll get eaten alive. The level is too strong.”