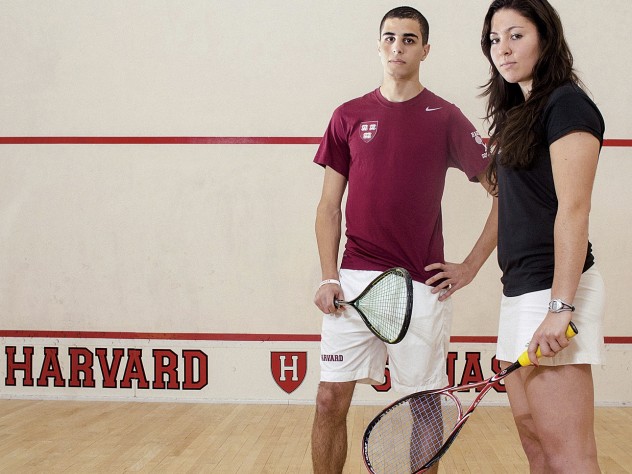 TWO PLAYING STYLES dominate elite squash today: English and Egyptian. The English style emphasizes steadiness, long points, and superior fitness—winning, essentially, by wearing down an opponent’s physical reserves and minimizing one’s own errors. In contrast, the Egyptian style accents the creative and deceptive aspects of squash, and taxes the opponent’s mental toughness. “The English game penetrates your legs first, and your head second,” says Ali Farag ’14, the Harvard men’s varsity number-one player. “The Egyptian style reverses that, and gets into your head first. An Egyptian player will go for a trick shot and win a point out of nowhere.”

Egypt has now become the world’s leading power in squash, with England, Australia, and France also strong. A skilled Egyptian player can demoralize an opponent with, for example, “nicks and flicks.” A nick is a shot that, after striking the front wall, lands exactly at the junction of the floor and sidewall—and so rolls out on the floor, impossible to play and a winner for the one who hit it. Traditionally, nicks have been considered fortunate shots, but today’s top players have such precise control that they can aim for a nick and often make one. Flicks are shots that veer in an unexpected direction at the last split second. With a flick of the wrist, a player who is clearly set up to hit a “rail”—a long shot close to the wall—instead flips the ball crosscourt toward the opposite wall, tying the opponent in knots.

Harvard is now blessed with two top players—Farag for the men and Amanda Sobhy ’15 among the women—versed in the Egyptian style. Both arrived in the fall of 2011 and had similar seasons last year: undefeated in all matches and winners of national individual championships at the College Squash Association (CSA) season-ending tournament. They are the reigning royalty of American college squash, both coached by Mike Way, whom they cite as a major factor that drew them to Harvard. Farag is 100 percent Egyptian. Sobhy has an Egyptian father and American mother; appropriately enough, her game is “a mix of the Egyptian and British styles,” she says. “I do have shots and deception, but when I want to, I can play the standard patient game, hitting length and crosscourts and not going for things too much.”

Coach Way, who mentors both the men’s and women’s teams, calls Sobhy “a good athlete with an unbelievable drive and work ethic. She steamrolls her opponents—probably more than 90 percent of them—with sheer power. Hitting that hard, Amanda gives them less time to react, so they have to lift the ball, slowing it down and setting her up in attacking positions.” Farag is “a purely instinctive player with a natural feel for the ball. The way he caresses and slices his shots is on a par with the best men in the world. Ali reads the game like a book: tactically, he is always anticipating the opponent’s shots, and he attacks relentlessly. He controls an extraordinary percentage of the rallies.”

In 2010 Sobhy, who comes from Long Island, became the first American to capture the World Junior Squash Championship, winning in Cologne, Germany, on her seventeenth birthday, June 29, by taking down Egypt’s Nour El Tayeb in a demanding final—“at the end of the match my lungs were about to explode.” Even before college, Sobhy was ranked first in the United States and as high as seventeenth in the world; she had won four U.S. junior national titles and five tournaments in the professional Women’s International Squash Players Association.

It is hard to overstate Sobhy’s dominance last year: she tore through women’s squash like a tornado. College matches use a best three-of-five game format; Sobhy not only won all her matches (15-0), but won all her games,recording five consecutive sweeps at the CSA individual tourney, capped by a shutout of defending champion Millie Tomlinson of Yale in the final. Sobhy was, inevitably, both Ivy League Rookie of the Year and Player of the Year. To get challenging competition, she often practices against Harvard’s male players or with the plethora of pros and coaches who visit the Murr Center courts. (And bear in mind that Harvard’s number-two player, Laura Gemmell ’13, was herself an undefeated national champion as a freshman.)

Sobhy typically sets a blazing pace in her matches, which frequently are decided in 15 to 25 minutes. She has both foot speed and enough power (“I’ve got a lot of muscle”) to hit rockets off both the forehand and backhand sides. She speeds up play by volleying as many balls as possible; professional players can handle the dizzying pace, but many collegians cannot. Sobhy also loves drop shots; she now seeks to cultivate a more varied pace in her game, to “throw in some lobs.” An anthropology concentrator, she hopes to play professionally after college and some day open her own club.

Farag hails from Cairo and completed a year at American University there before Harvard. Egyptian players have the advantage of being largely concentrated in Cairo; at Farag’s Heliopolis Sporting Club, he often plays with many of the world’s best, including Ramy Ashour, frequently the world’s top-ranked player in recent years. Farag aims high: his sporting idols, he says, are Roger Federer (yes, he plays tennis, too) and retired French soccer star Zinedine Zidane.

In 2009, Farag was ready to quit the game and sell his racquet after a pair of devastating losses—a player he feels he should have beaten bested him instead, 3-0, twice in two months. But his older brother, Wael, a strong player himself, took over as his coach and a few months later Farag reached the finals of a national tournament. He captained his Egyptian team to the world junior title in Quito in 2010 and was ranked the number-one junior player in the world after winning the British Junior Open in 2011.

At Harvard, he went 16-0 (he did lose six games over the course of the season) and swept all opponents en route to his CSA national championship, triumphing over Columbia’s Ramit Tandon in the final. During the regular season, he unhorsed Princeton’s defending national champion, Todd Harrity, settling a score for his family, as Harrity had handed Wael Farag a tough defeat years earlier. Naturally, Farag, too, was Ivy Rookie and Player of the Year.

He nearly didn’t come to Harvard. Initially he was adamant about staying in Egypt, but he played a tournament in St. Louis and, with parental encouragement, made a visit to Cambridge and had an interview. He returned to Egypt two days before the revolution there, and his father urged him to earn a Harvard degree and use it to help his homeland. An academic all-Ivy, Farag is a mechanical engineering concentrator who wants to bring solar-energy technology to Egypt. “There’s a massive resource of sunlight there,” he says. “An average of 9.5 hours per day.”

Though the two champions have had similar Harvard careers, their teams’ success has diverged slightly. Last year, the women’s team went 17-0, winning the Howe Cup, symbolic of the CSA national team championship. The men’s squad (16-4), finished third in the country, up from fifth the year before, losing to Princeton, Yale, and Trinity in the regular season and to Trinity at the CSA national tournament. (Princeton won the 2012 Potter Cup and national title, besting Trinity in the final.)

This year, the Harvard men return all their starters from the young squad that played last year—the season in which Yale finally ended Trinity’s unearthly 252-match winning streak that dated to 1998. “Trinity’s players have the eyes of the tiger,” Farag says. “They are strong mentally and have the most intense fighting spirit. This year, we’ll be the most intense. That’s all it takes—we have the will, so we will find a way.”