Sobhy, a former World No.6, had spent 10 months on the sidelines due to an achilles injury before making her comeback at January’s J.P. Morgan Tournament of Champions, and she showed signs that she is approaching the level she was at before the injury with a stunning display after a slow start.

World No.3 El Tayeb’s historic win alongside husband Ali Farag at last year’s U.S. Open saw them become the first married couple in sporting history to lift the same major title on the same day, and she looked full of confidence as she hit an array of winners to take a two-game lead.

However Sobhy, cheered on by the American crowd, responded brilliantly and forced El Tayeb onto the back foot as she hit perfect lines into the back corners, while she was just as clinical at the front of the court to complete a 9-11, 8-11, 12-10, 11-6, 11-6 triumph which will see her take on France’s Camille Serme for a place in the semi-finals.

“It’s a special win for me,” said New York-born Sobhy

“I was thinking about this match since the summer. I know how good she is and she won it last year, but I wanted to prove to myself that I could do it. I narrowly lost to her in five at the British [Open] and I knew that I’m right there with the top three still, but I just need to break through and I’m so pleased with how I fought back today, and having my whole support team here is huge for me and a big confidence booster.

“It’s amazing to be back here. I missed it last year, I was down here but it was a really rough time for me with my progress just being stalled and I was really hopeless at that time. Coming back here, it’s the biggest and most prestigious tournament in the US and I did my rehab in Philly, so it is a second home for me.”

Serme avenged her defeat to Annie Au at the Oracle NetSuite Open two weeks ago with a 3-0 win over the World No.11 this time around, while World No.1 Nour El Sherbini continued her strong start to the tournament with a victory over World No.9 Alison Waters by the same scoreline. 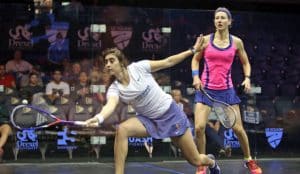 El Sherbini will clash with compatriot Yathreb Adel in the next round after the World No.30 followed up a second round upset over World No.7 Nouran Gohar with another surprise win over World No.15 Salma Hany in five games.

In the men’s tournament, World No.1 Mohamed ElShorbagy took a step closer to the final after he defeated Indian No.1 Saurav Ghosal in an entertaining 51-minute battle.

ElShorbagy, who fell to Farag in last year’s final, dropped just five points in the opening game but was tested by a resurgent Ghosal in the next two games and required a tie-break victory in the second, before he edged the third to complete the win by an 11-5, 16-14, 11-9 scoreline. 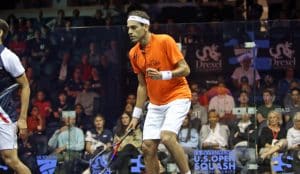 “Our matches are always very tight and very difficult. He always knows how to move me around the court, so I knew from the first point that I had to be sharp and on my toes and I’m really happy with how I won that crucial second game. In the third game he made a comeback and I’m just glad that I closed it out in the end.”

The in-form Mohamed Abouelghar stands between ElShorbagy and a place in an eighth successive PSA Tour semi-final after a sublime performance from the World No.9 saw him down fellow Egyptian Karim Abdel Gawad in straight games.

Abouelghar has started the season brilliantly, winning his biggest PSA Tour title last month at the J.P. Morgan China Open, and he dismantled 2016 World Champion Gawad, claiming an 11-8, 11-9, 12-10 margin to earn his place in the last eight.

“I had a disappointing second-half last season,” said Abouelghar. 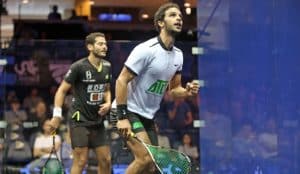 “I knew a change had to be made and luckily it has worked out sooner than expected. I would say that was my finest performance today and I had to be at my best to beat someone like Karim.”

World No.4 Tarek Momen and World No.8 Paul Coll also claimed wins against England’s Declan James and Egypt’s Omar Mosaad, respectively, and they will go head-to-head in the quarter-finals.

Third round action continues tomorrow at 12:00 local time (GMT-4) on Tuesday October 9 and all matches will be broadcast live on SQUASHTV (Rest of World), Eurosport Player (Europe only) and DAZN (Japan.