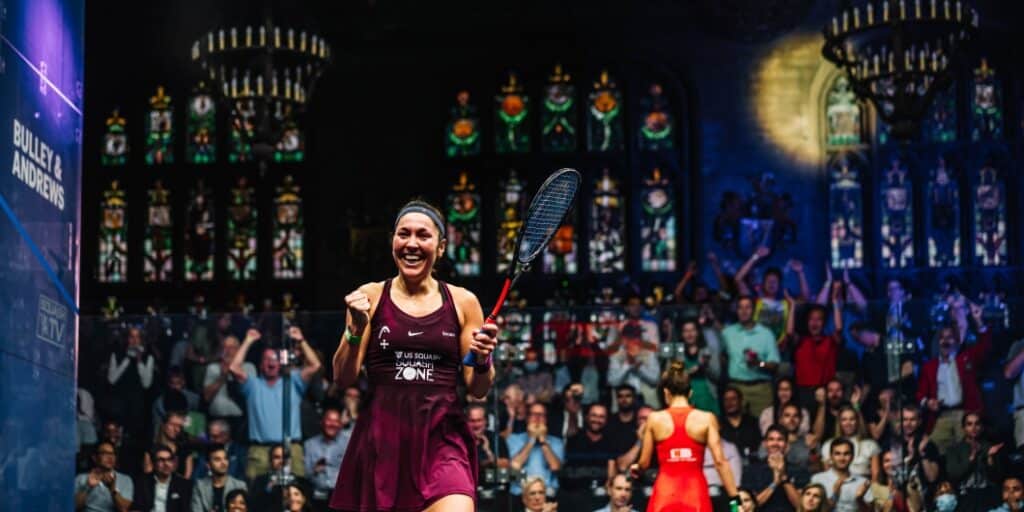 Boston’s Amanda Sobhy has become the first US-born player in history to reach the semi-finals of the PSA World Championships presented by the Walter Family following her 3-0 victory over World No.5 Hania El Hammamy under the chandeliers of the University Club of Chicago’s Cathedral Hall earlier today.

The last time the semi-finals of squash’s most prestigious tournament featured a US player was back in 2007 when Natalie Grainger reached the last four, but Sobhy ensured that 14-year wait came to an end with a marvellous 11-3, 11-8, 11-9 victory against an opponent ranked two spots above her on the PSA Women’s World Rankings.

“I tried to stay really focused because she is phenomenal in the big points. I knew she would be really good on those big points, so I had to be better. I tried as much as I could to step up, stay confident, stay aggressive in those points, keep pushing the pace and once I won that final shot, all the emotion came out of me, I am very pleased.

“I’ll make sure that I recover well, eat, hydrate and sleep, and then prepare for my match against [Nour El] Sherbini. We played at the Black Ball Open and this season we are at 1-1. I love the energy here, I love competing and I just don’t want it to end, so I will just keep giving it all I have.”

World No.1 El Sherbini – who will be overtaken as the world’s leading female player by Nouran Gohar if she gets beaten by Sobhy – is through to a sixth successive World Championship semi-final after she beat England No.1 Sarah-Jane Perry 11-6, 12-10, 11-2 in 30 minutes.

El Sherbini – who already has four World Championship titles under her belt at the age of 25 – is now one win away from becoming the first woman to reach six successive World Championship finals. The only other player to achieve that was six-time World Champion Jahangir Khan, who reached six straight finals in the men’s game between 1981-1986.

“For me, this tournament is very important and once I reach the quarters, I tell myself it is a new tournament and to forget the last few rounds, to start fresh again,” El Sherbini said.