Welcome back to a new year, Sobhy Squad! I hope you didn’t miss me too much.

The Professional Squash Association (PSA) has announced that the next tournament will be held March 12-18, once again at Black Ball Sporting Club in Cairo, Egypt! What would we do without Egypt hosting 99.9% of the major tournaments this season? Now that we are in the beginning of March, let me update you on what’s been happening in my life these past few months!

For starters, the city of Philadelphia opened up on January 5th, which was a big day because that meant that The Racquet Club of Philadelphia opened up too! January 5th was also the day that I started coaching at Lifetime Club in Berkeley Heights, New Jersey. Yes, you heard that correctly. I took up a coaching gig for the entire month of January and became “Coach Mands”.

Here’s how it all came about…

Back in December, while I was in Egypt for the Black Ball Open, Phil Wilkins (the pro at Lifetime) reached out to me to see if I had any interest in coaching some of his students. He had a thriving junior program, with a lot of girls playing squash, and wanted to know if I would coach some of his students. Given the fact that I was going home to ZERO income, and still no funding in sight, it was hard to turn down such an opportunity. I did a “trial” coaching day where I taught for 5 straight hours of private lessons. Oh, and with a mask on too! Apart from my feet in absolute shambles and wolfing down protein bars and bananas in between water breaks, that first day was a great success! In fact, I absolutely loved giving back to the next generation of juniors. The kids I worked with were awesome. I passed the test and was asked to come back the following week to coach 7 hours straight! Apparently word got out and more students wanted to get coached by yours truly. It’s no joke to coach 7 private lessons hours in a row, but I couldn’t turn it down!

Here are the takeaways from that day:

I survived those 7 hours, but I realized it was more than I was capable of handling in one day. While I loved working with those students, my body definitely did not love standing 7 hours straight on a squash court. I knew that I needed a slight modification. So for the month of January, I had the opportunity to work with 3 students every Tuesday and Thursday afternoons. It was a commitment, but given the fact that there were no tournaments in January and February, I agreed. It was a long 90 minute commute to the club, and a lot more hours on my feet, but it was better than sitting on my ass twiddling my thumbs with zero purpose. It was time to grind!

Grind is exactly what I did for the month of January. Every Tuesday and Thursday I would rent a car, drive the hour and a half to North Jersey, and before coaching my students, I would train with Dr. Donald Shrump, my high performance sports science coach. After my session with him, I would eat my packed lunch in the car, drive half an hour south to the Lifetime Fitness club, and teach my 3 hours of private lessons. Once finished at 7:30 pm, I would shower and drive the hour and a half back to Philly. At home, I would finally eat dinner, drink my Beam Dream and literally pass out. On the days I didn’t commute to Jersey, I was training at the Racquet Club of Philadelphia with either my sister, or the guys on the Drexel team. By Friday morning’s session, I would fully feel the effects of my aggressive week of training, coaching and commuting and found myself running on fumes.

Ironically, that was the day when Beans and I decided to play a practice match. We both were exhausted from the week and neither of us wanted to drill, so we looked at each other and half jokingly said, “let’s play a match?” We trolled each other on social media before we began, putting up a poll on Instagram to see who would win, and then played our match. It was such an intense match and we had so much fun battling it out. We thought, if we were enjoying the match so much, then surely others would enjoy it as well, right? That’s when I came up with the idea of a “Virtual Sobhy Showdown!”

The following Friday, we held our first Showdown, a live-streamed match on my instagram. We didn’t know what to expect but figured that there were a lot of people out there who probably missed watching competitive squash. I brought my handy dandy influencer tripod to the Racquet Club, set up my phone and live-streamed our match. The first rally alone was a couple minutes long, so that set the tone from the word GO!. After close to an hour of competing (with masks on), I snuck out the win 11-7 in the fifth. We were exhausted but we had so much fun and those watching thoroughly enjoyed it as well! Our inaugural Virtual Sobhy Showdown was a success! After getting feedback from the audience, we made some upgrades like roping in Head Pros, Rob Whitehouse and John Lumley, to keep score and to provide commentary for Round 2, which we played the following Friday. Once again, our match went the full distance with Beans barely sneaking the win, 12-10 in the fifth. We were exhausted but loved the competition and so did the audience! 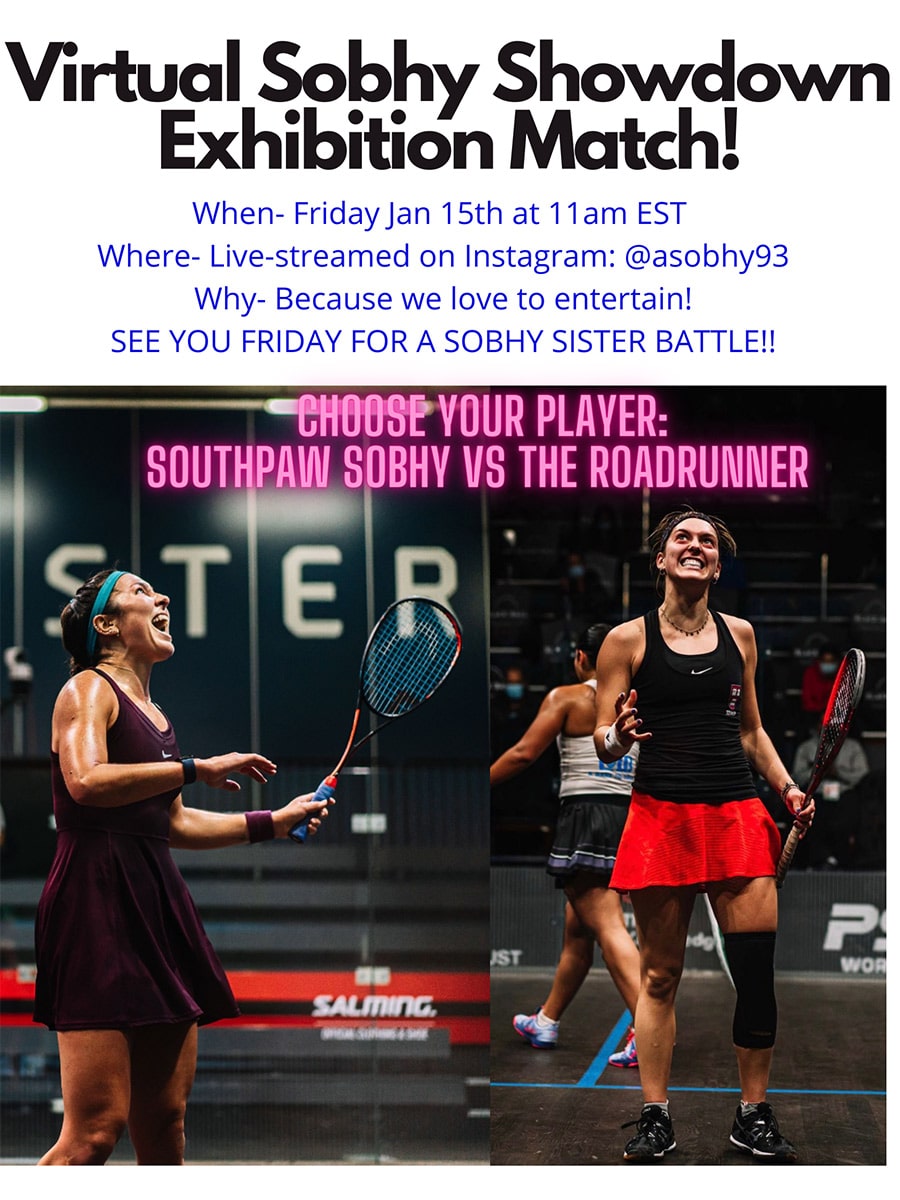 After a month of grinding out training, coaching, commuting, and playing weekly Sobhy Showdowns, I was starting to feel myself breaking down. As much as I loved coaching, it was taking a toll on me both mentally and physically. The 90 minute commute each way didn’t help either. As a result, the quality of my training started to diminish due to my exhaustion and mental fatigue. I simply couldn’t keep up this lifestyle especially knowing that there was a potential tournament in March. Unfortunately, my time as “Coach Mands” had to come to an end.

For the month of February I went back to training full time. During that month I had some time to reflect on being a part time coach; part time pro. I thought about how I survived that grind. For starters, I made sure to prioritize sleep, nutrition, hydration, recovery, and taking care of my body. I knew the demands of being a coach were strenuous and I definitely didn’t want to get injured. Self-care and recovery became top priorities. I was very conscious of taking care of myself while coaching because I had made a commitment to others. If I had become injured, everyone would have lost out. It probably sounds strange, because I am a professional athlete (and should automatically take care of myself) but when your choices directly affect others, you tend to make better decisions. Well, at least that’s the case for me.

Another take away from my time as “Coach Mands” was the enormous appreciation I now have for those players who are coaches. The fact that some coaches consistently teach 7 hours a day is beyond mind boggling. How do they do it? No wonder my coaching friends have parts of their body that are always hurting or injured. Full time coaching is no joke! It’s a major grind! I loved coaching my students, and I really loved giving back to the next generation of squash players but I was very happy to get back to full time training. Don’t get me wrong, I was extremely grateful for the opportunity to coach. Perhaps later on in my career I’ll do it, but right now it’s time to focus on my professional career! 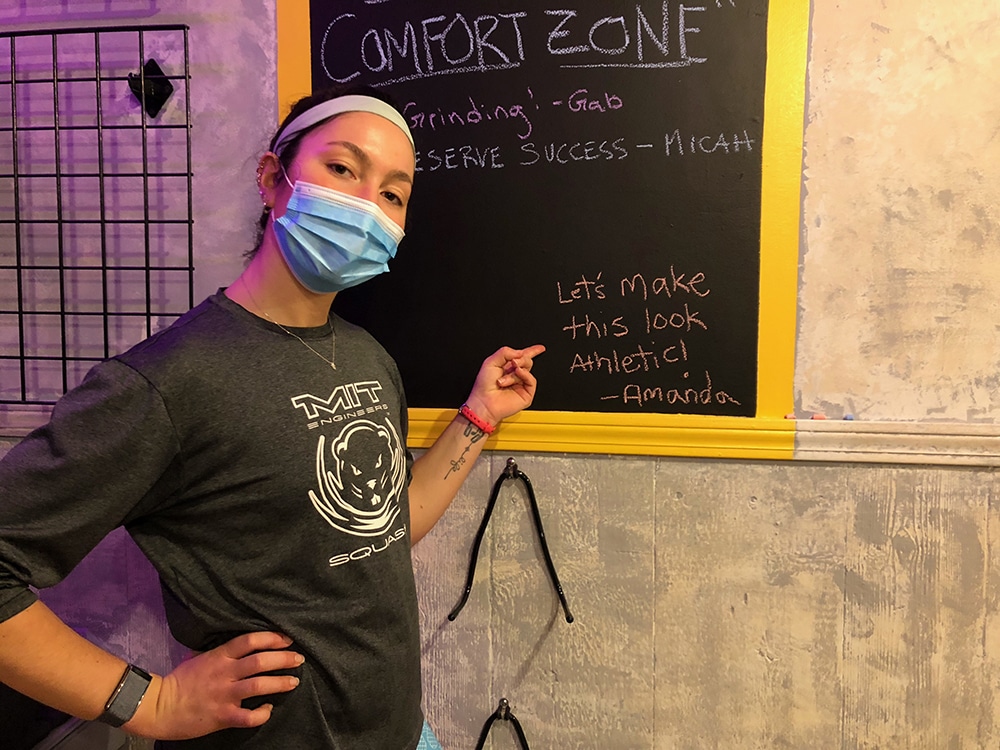