Amanda Sobhy was born with squash DNA in her genes. Her parents Khaled and Jodie were squash champions and it was their daughter’s destiny to end up on a squash court.

Sobhy, from Sea Cliff, is the seventh ranked squash player in the world and the only American to reach that position.

“I never really thought of myself as successful. I still don’t think I am. I think there so much I can accomplish and achieve,” Sobhy said on Friday. “There’s a lot of pressure in the fact that I’m the sole U.S. player at the top of the rankings. It motivates me, I’m doing it for myself and for the U.S.” 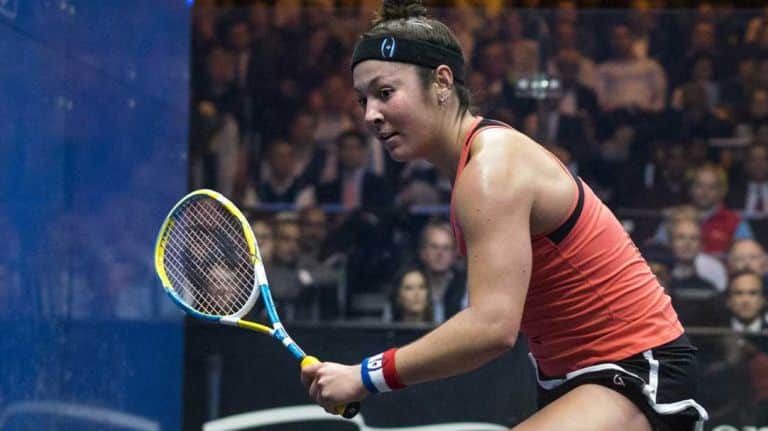 What she is trying to do for the U.S. is create an enduring interest in squash. America doesn’t boast a strong squash society, but Sobhy’s main goal is for the country to be an epicenter for the sport.

And she will emphasize that point when she plays in the J.P. Morgan Tournament of Champions held at Grand Central Station Jan. 12-19. Sobhy was runnerup in the event this past January, defeated by the number one player, Nour El Sherbini of Egypt.

“You need a player to do well and be successful. You just need one. I’m hoping to do that. I would love to really help grow the sport in the U.S.,” Sobhy said.

In 2010 Sobhy became the only American to win the World Junior Squash Championship. She’s the second woman to win four intercollegiate titles, while at Harvard, going undefeated in 62 matches and losing only two games.

Sobhy is the only squash player to win three gold medals at a single Pan American Games, winning singles, doubles and the team event in 2015. Sobhy earned one of eight spots in the 2016 Women’s PSA World Series Finals and finished fifth.

“Amanda is capable of helping bring squash to the light. Through charities and after-school programs, bringing the sport where it hasn’t been,” said John Nimock, the Tournament of Champions producer. “She’s totally enthusiastic and she’s only 23.”

Sobhy’s making a name for herself and the sport through her accomplishments and volunteer work with urban programs.

At the Tournament of Champions, the crowd will be cheering for the New Yorker. Sobhy wants there to be more Americans to cheer for.

“Short term, I would love to win the Tournament of Champion. Long term, I want to be number one and become the world champion. Ultimately my goal is to grow the sport in the USA. I want squash to have the same exposure like baseball, hockey and football,” Sobhy said. “My job is to perform and get to top and let people know about squash.”