Amanda Sobhy has revealed that a career-threatening injury that derailed her career and cost her, her place in the PSA World Tour top 10 rankings has provided her with the mental strength to navigate her way through the stresses and anxieties of the COVID-19 pandemic enforced lockdown and suspension of squash.

On March 11, 2017, Sobhy was perched at a career high World No.6, occupying the highest ever ranking position achieved by an American-born squash star, with semi-final placings in both the Malaysian and Hong Kong Opens and three US National Championships already in her back pocket.

Yet on that fateful day in the semi-finals of the Ciudad de Floridablanca, Sobhy’s Achilles snapped and enforced an angst ridden 10-month period out of the game, prompting fears a full recovery to those previous glorious heights may never be possible.

Yet the 27 year-old has fought back to reclaim that lost ground and is now back to No.7 in the PSA rankings, and as she contemplated the eventual return of the tour, the Sobhy revealed that world of torment has helped her come through lockdown unscathed.

“The big thing for me is that I’ve been through this kind of thing before as three years back I had almost a year out with a bad Achilles injury,” recalled the Harvard-graduate.

“So what you have to do is adopt a positive mindset, enjoy the time with your family and friends that you have missed out on when you have been on tour and work on the things that will give you gains when you are ready to crack on.

“The recovery from that Achilles injury was the most difficult journey I’ve ever been on and there is no doubt it has helped me through these months of lockdown and also to retain my perspective. Back when I did the Achilles people told me the recovery process would take a long time, but I had no idea it was going to be that tough.

“It was 10 months and I still couldn’t do a single leg calf raise, plus the muscle waste on my leg was ridiculous, but the hardest part for me mentally, physically, and emotionally was when I had to make that jump from doing normal physical therapy to rehab that got you back to being a regular human again and then to move that on to specific rehab work for a professional athlete.

“It was such a crazy journey filled with a bunch of ups and downs and obviously there were a lot of times when I thought I was never going to get back to the tour, never mind top 10 level. But I made that journey and did so thanks to some amazing team people helping me who stuck by me throughout the whole recovery process.

“So, when it comes to COVID-19 and the suspension I have been pretty philosophical about it all. Plus on a personal level I have missed so much time with my mum that it has been great to make up for all that and get time back together that we probably would never have had the chance to get back.”

Sobhy’s summer sojourn in her hometown of Sea Cliff, Long Island, has been boosted by the timely return of her sister Sabrina ‘Beans’ Sobhy.

The World No.29 has provided Sobhy with sisterly companionship that has left both reliving memories of their youth while also providing each other with a world-class practise partner: “I have been really lucky in that Beans has been back staying with my mother and I in our place about 20 miles from New York City.

“We are very lucky in that it’s a beach village and that has meant that while we have the escape of the beach and enjoy the places we went to as kids, we can also get plenty of runs in.

“We are also lucky in that we have had the use of a private court and if you are a squash professional and in lockdown while the tour is suspended, to be able to hit with another world-class professional who just happens to be your sister, well it doesn’t get much better than that.”

With a laugh coming down the other end of the line, Amanda couldn’t resist a sisterly dig at Sabrina: “Plus hopefully I gave ‘Beans’ a few tips that will help her now she has headed back to Egypt. 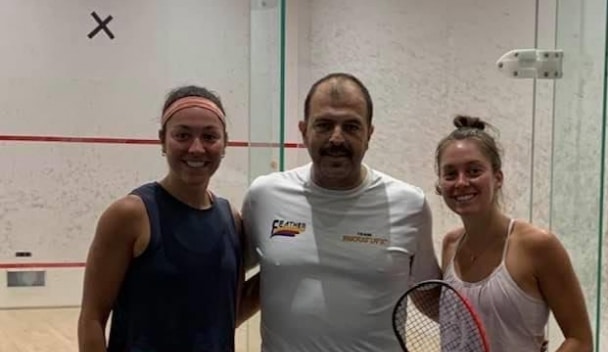 The Sobhy sisters, Amanda (left) and Sabrina (right) get back on court following lockdown.

“But seriously, we have been hitting twice a week on court and just trying to keep a balance of not doing too much and maybe going stale when we don’t even have a date for the tour resuming, but at the same time keeping our timing, feel and ball striking at a good level.

“Once we have a definitive date for the resumption of the tour, I will really crank things up. But if you look at maybe things resuming, in a best-case scenario, at the middle or back end of September then we could be a while away from hearing that, no matter how much we want the good news.

“So, as I mentioned what matters just now is that you yourself a good base without overdoing things and going stale.”

But there has also been plenty for Sobhy to work on during lockdown and the World No.7 revealed she has had a pet project that she hopes will make sure she stands on her best leg when the PSA Tour returns.

Sobhy revealed: “One of the specific things I did set myself to improve was a weakness I have in the left calf. I call it my baby calf, and it is nowhere near as strong as my right calf, so this has become my lockdown project.

“I am very optimistic that by the time I get back on court for serious then the additional work I have done on it will make a really positive difference on my mobility, explosivity and general movement around the court.

“But Beans and I have also been lucky in that we have been doing work with a fitness coach, who I will refer to only as the mysterious ‘Mr Wilson’. He has a warehouse that has been converted into a fitness centre and there has been plenty of work on all kinds of stuff that will stand me in good stead when we get ready to step things up and countdown to the tour resuming.

“I think that will give me a lot of satisfaction to have turned around something that has been an issue and made it a strength and Mr Wilson has been a great help in that regard.”

The big news of the summer has been the retirement of the then World No.1 Raneem El Welily and Sobhy admits the Egyptian will be badly missed from the women’s game. 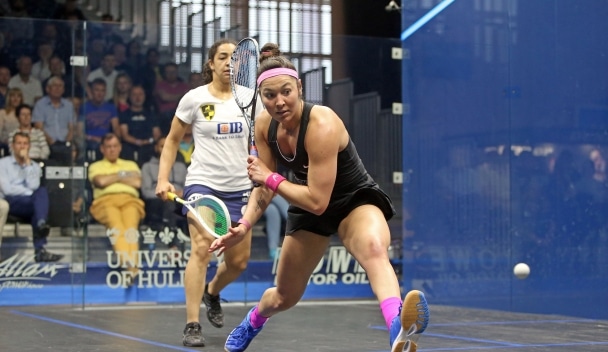 Sobhy takes on Raneem El Welily during the 2019 British Open

“Raneem was a class act both on and off the court and there is no doubt about it, she will be a huge loss to us. But am I surprised she has decided to retire? Well not really” said Sobhy.

“If you take in all the angles then she is 31, had been on top for almost two years, has pretty much won everything there is to win and then finds herself in a situation when she doesn’t know how long it is going to be before the tour resumes.

“When you factor in that Raneem and Tarek are keen to start a family then I’d say this is the perfect time for her to call it. But what I would say is that while she was the nicest person on the planet when it came to playing Raneem, she was my biggest nightmare on court.

“Sometimes I’d find myself up in a game and be thinking I don’t even know how I got there and then that would be it, she would hit me with lights out squash and the game is gone and it’s like, well that’s just Raneem.

“Really, she was that good, but Raneem was also great to be around. So many No.1s can be jerks but not Raneem and she will be so badly missed on tour when we get going again. But playing wise, for me, Raneem was just on a different level.”

Projecting forward to the post-El Welily resumption of the tour, Sobhy admits she is excited about the ensuing battle that will provide the women’s game with its new order.

She said: “With Raneem gone, I think the game is really open at the top end and you have four or five players, minimum, who could emerge as the dominant one or maybe we could face a spell where the top ranking is constantly changing.

“For sure, I think there is going to be some battle at the top of the women’s game, and I think that is exciting and really positive for us. When you look at how well Hania [El Hammamy] has come through and won the CIB Black Ball Open before the tour was suspended then who is to say that she might not emerge as the game’s next dominant force.

“But for me, I plan to be in that mix, I am back at my highest ranking since the injury and at 27, I believe my best years are right ahead of me and I’m just really excited about the possibilities when we get back on the road.

“I just hope that we will maybe hear something on that before July is out.”