Amanda Sobhy has admitted her delight that the PSA World Tour has confirmed the resumption of the second-half of the season with the announcement that the CIB Black Ball Squash Open will be held in March.

The US No.1 produced her best form of the first-half with a hugely impressive run to the semi-finals of the 2020 Black Ball Open, in Cairo, last December. The defining result of that form surge came in the quarter-finals where she defeated World No.1 Nour El Sherbini after overturning a 2-1 deficit to claim a nerve-shredding fifth game 11-9.

That seminal victory was the first time ‘Southpaw Sobhy’ had defeated the ‘Warrior Princess’ since before her career threatening Achilles injury in 2017, with her previous victory over El Sherbini coming at the 2016 Hong Kong Open.

Yet although the American was beaten in the last four in three very tight games by Hania El Hammamy, Sobhy returned to the land of the free with a spring in her step.

After basing herself in Philadelphia, the World No.7 has now been following a high-tech sports science driven regime which has been given new purpose by the announcement that Tour will continue in four weeks time.

“I’m really excited, I was hoping we could get a tournament in March just because it would give us something to work towards.

“I have been pretty happy doing my own thing and have been coaching a bit but although I have had some sort of structure, routine and I guess purpose, to now be able to get back to what I love, which is train full-time and play at tournaments, is the best news and I’m just really happy.

“Thankfully, Egypt just keeps coming through for us and I love Black Ball, I’ve had decent results there and my dad Khaled, lives a five-to-10-minute drive from the Black Ball Club and I stay with him along with my sister Sabrina.

“So, it’s a bit of a home-from-home and I’m looking forward to getting back out there next month.”

Turning her attention to the level of self-belief that epic victory over world champion El Sherbini gave her, Sobhy revealed: 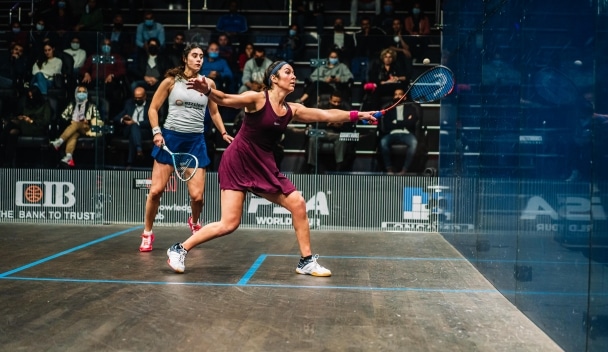 “It was definitely the best win of my career. The fact that I came back from 2-1 down and I think in the last game I was behind and coming back so to turn it around, to get the win 11-9 in the fifth was massive for me.

“Especially after a year when I have been a bit up and down and had a few bad results and early exits, lost a bit of motivation, it was a really important win for me. So, to be able to end 2020 on a really positive note was just very satisfying and it was kind of what I needed to reassure myself that what I was doing was right, that I had more to give and I need to keep going.

“It was such a confidence booster. When you start having inconsistent results and start losing to people you have never lost to doubt starts to creep up and you are going into matches lacking confidence and a bit tight. Really to produce that win against Nour it just told me that: ‘Yes, I can beat the top players, I can be one of the best players in the world and I have it in me.’

“So, it has given me a lot of self – belief and also the fact I played a five – game match and came back from 2-1 down gave me a real boost and I’ve started to enjoy that a lot more.

“I’m staying in the present, in the moment, rather than stressing about how much longer the game has to go or saying like: ‘It’s another long rally and it’s just the third game!’ My body has been feeling really good throughout all of this and that is a big plus, really it’s been the best it has been.”

The 27-year-old has no doubt that the final tournament of 2020 has confirmed just how open the women’s tour is:

“I think the women’s game is super exciting right now as you don’t just have one person who is beating everyone else. Yes, you do have players who are more consistent, but the fact is someone like me has beaten Sherbini and SJ [Perry] has beaten Hania, and you would have to say that Sherbini and Hania have been the two most consistent players this past season.

“But the Black Ball showed there were chinks in their armour, they are human, and they are beatable to and that gives hopes to the other girls who will say: ‘If SJ or Amanda can do it why can’t I?’

“SJ has had up and down results but she delivered that performance and all of that, just like my result over Sherbini did for me, will have given her a huge shot of self-belief.

With Philadelphia coming out of lockdown in the first week of January, Sobhy wasted no time in returning to full training at her new base in The Racquet Club of Philadelphia:

“I’ve actually been training this whole time. After doing well at the last Black Ball in December, when I made the semis, something just clicked, and it was like I had rediscovered my love for the game. I just had an energy and excitement to build on that.

“So, I am based in Philly and once it came out of lock down in the first week in January, I was just so excited to get going again and get back in to training at The Racquet Club of Philadelphia and it has been amazing, and I count myself real lucky.

“There is a ton of people in Philly, my sister Beans [Sabrina] now stays in Philly, so we have been training really hard together, there are a couple of guys on the Drexel Team who have joined the Racquet Club, so we have a cool group and also you have the club pros, so it really is a great group and we also have a fab gym.

“So, it is a good set up and that has really provided me with a good base since the beginning of January.”

As Amanda revealed there has been another change in the dynamic of her training regime after her hook up with renowned New Jersey based Sports Scientist Dr Donald Shrump:

“I’ve been working with a Sport Science expert, Donald Shrump, and he is a very high-performance sports science guy. Donald has worked with a lot of top athletes, players etc and he is based in Jersey. So, with me coaching there we arranged to start working together and he got to assess my strengths, weaknesses and where I could improve.

“We did a lot of pre-hab and PT exercises to make sure my body would be able to do the work it needs to do, all those old things that you know you should do but at the end of training but that you are asking yourself: ‘Do I really want to spend another half an hour doing this?’

“It’s made me excited and I wake up every morning asking: ‘What am I going to do today?’”

Yet Sobhy is looking forward to getting down to some serious court work with her long-time squash coach, former world No.1 Thierry Lincou, next week at his Boston base.

“Thierry Lincou is still my coach. I am at that age where I know the programmes I need and after years of working with Thierry I know how my weak structure looks but I do need someone to feed me balls as right now I am almost having too much match practise!

“So, I am going up to Boston next week to spend an entire week working with him on technical things at his base at MIT where he is director of coaching, where I also used to assist him and I’m really looking forward to it.” 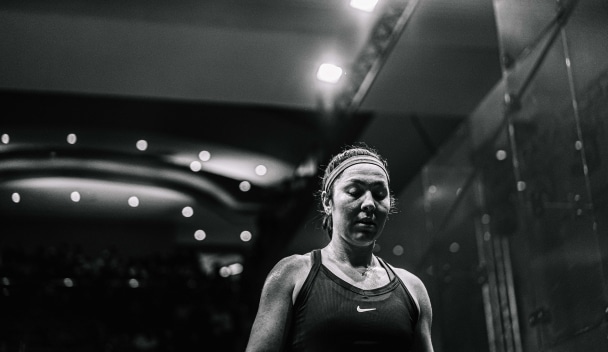 Yet the kind-hearted US No.1 has also been busy putting something back into the grassroots game in her homeland, but candid as always Amanda admits it has given her a new appreciation of the draining demands a full-time coach faces in his or her day-to-day professional life.

“I have been doing a bit of coaching in New Jersey, the coach at one of the Lifestyle clubs there, Phil Wilkins messaged me to ask if I wanted to do some coaching over the holidays and I was like: ‘Yes!’

“I didn’t know when the next tournament was coming, and I needed income to live so I got pretty much into it and coached five – hour straight lessons with a bunch of different kids and then through Christmas it went up to seven hours.

“They had a few girls who were really good, and Phil asked me to work with them Tuesday and Thursdays for six weeks and we have been assessing things every two weeks pending the tour restarting and it has gone well.

“But as much as I love coaching it is very draining. It’s also mentally taxing and when you add a 90-minute commute to New Jersey in there it is a long old day. So, I was happy to keep the coaching going as long as mentally I was good, physically there were no issues and until we got a date for the tour resuming and it’s been good throughout January.

“At the time we still didn’t have any income and I had to pay rent and also living expenses, so the fact I had the chance to make some income and also give something back to the next generation was just really good.

“But it made me realise that coaching is maybe not where I want to go when I’m finished playing. I am much more interested in event promotion. I have to say coaching was eye opening, my feet were so dead, I was so drained, and it was like: ‘How do I eat when I’m coaching seven hours in succession?’

“So now I have a new found appreciation for all my friends and every squash coach out there who does this. I’m like: ‘How do you do this? I’m exhausted!’”