By that point, as he watched Sobhy steamroll her way to a 33-minute final-round win, Barrington seemed to have exhausted his supply of superlatives.

“That’s powerful, very very powerful,” he said after a Sobhy forehand smash ricocheted around the back corner of the glass-walled court for a winner.

“This is the most efficient title of her career,” he said as Sobhy brought the rallies to ever-quicker conclusions in the third and final game.

It was hard to argue with his word choices. Destruction was the order of the day, and the week, for Sobhy in San Francisco. Seeded second, she beat two fellow Top 10 opponents and didn’t drop a set; her first-round match took all of nine minutes. This was the 28-year-old Long Island native’s 18th career PSA title, but it was her first of 2021, and it came at an opportune moment. This week she’ll return to the city where she lives and trains, Philadelphia, for one of squash’s major events, the U.S. Open.

“It’s going to be interesting because this really takes the home tournament to an all-new level,” Sobhy said on Monday. “I live about a 15-minute walk away, and I’ve never actually played a tournament where I live, so it’s exciting.”

This is an exciting moment for Sobhy, and for U.S. squash in general. For the first time, the Open will be played in the American game’s eye-popping new Mecca, the Arlen Specter Squash Center, which is housed in a striking, century-old armory building on the campus of Drexel University. Opened in May, the 20-court facility serves as the headquarters for US Squash, and as an everything-under-one-roof training center for top American players like Sobhy and her younger sister, Sabrina.

The center will try to build on the momentum that the country’s women pros have been generating recently. For the first time in PSA history, the U.S. has three players in the Top 20: Amanda reached a career-high No. 3 this week, as did fellow American Olivia Blatchford Clyne at No. 11. Philadelphia native Olivia Feichter is currently No. 20, and Sabrina Sobhy is No. 21. (The highest-ranked American male is Shahjahan Khan at No. 40.)

The biggest breakthrough may have come in July, when Amanda became the first American-born player to make the semifinals at the sport’s World Championships, in Chicago. While the U.S. hosts many of the game’s biggest events, it has yet to produce a global champion. This may not be quite as surprising or discouraging as it sounds: For more than a century, the U.S. played a different version of squash, called hardball. As the name suggests, the ball was harder and faster than the soft rubber ball used internationally, and the court was longer and narrower. Only in 1993 did the U.S.-based pro hardball tour fold itself into the international softball tour. Since then, softball has been dominant everywhere, and U.S. players have been in catch-up mode.

Sobhy, who says she feels like she’s entering the prime of her career, wants to change that.

With its move to a high-profile facility in an urban center, US Squash is attempting to transform the game from a “prep-school pastime to a mass sport,” as the Philadelphia Inquirer put it. Amanda, who was inspired to pick up a racquet by another pair of sport-changing sisters, Venus and Serena Williams, isn’t afraid to say that she wants to be the face of that democratizing effort.

“Squash is such a fantastic sport, I wish it could be exposed to more people,” she says. “I’d love to be an inspiration for the next generation of girls.”

Like most Americans, the Sobhys grew up in a town—Sea Cliff, NY, a 5,000-person “hippie village,” as Amanda calls it—where virtually no one was exposed to squash.

“‘Squash? You play squash?’” is how Sabrina Sobhy describes the typical reaction, in her hometown and elsewhere, when she tells people what she does for a living. (Tennis may not be a fully mainstream game in the States, but at least people know it’s not a vegetable.)

Amanda, Sabrina and their brother Omar tried their hands and feet at more popular games, like soccer, lacrosse, volleyball, softball, and tennis. Amanda picked up tennis at 4; according to her mother, Jodie Larson, she quickly impressed a local teaching pro with her hand-eye coordination.

“‘I want your daughter!’ he told me,” Larson says. “Amanda was naturally gifted at whatever she did. I really think she could have been a pro at any sport she chose.”

Unlike most of their neighbors, the Sobhys also had access to squash courts. Jodie and her husband, Khaled, both played the sport. They met when he came from his native Egypt to play in a tournament that Jodie was running in New York. After settling in Sea Cliff, Jodie taught high school music while Khaled taught squash at the Creek Club in nearby Locust Valley.

“I played every chance I could get with my dad,” says Amanda, who traded her tennis racquet for a squash racquet at 11. She won the first tournament she entered.

“Amanda was all-in,” Larson says. “With Sabrina, squash was kind of written into the cards for her. All of us were going to tournaments, so she was kind of roped into it. It’s not easy being in Amanda’s shadow, but Sabrina has tremendous talent, too.”

Rather than try to escape that shadow, Sabrina has followed in her sister’s footsteps. Both played at Harvard, both spent time on the courts in Cairo during trips to see their father, and both now train at the Specter Center. They’ve played each other “a million times,” Sabrina says, but have yet to face off in a PSA event. Most of all, both are happy to have the other along for the pro-tour ride, which can be an isolating one for young women traveling the world, and playing a grueling game, during Covid times.

“I love that I have a sister who plays on tour,” Amanda says. “I love having family with me. It makes it a much less lonely sport.”

As for their mother, Larson doesn’t have time to travel to all of the tournaments, but she did volunteer to be an usher in Chicago last year.

“I had my spot and I wasn’t moving,” she says. “I was the usher fist-pumping at the front of the court.”

At 5’8”, with a strong left arm, Amanda—known as Southpaw in the squash world—plays a forceful all-court game. At 5’3”, Sabrina wins with her speed and good hands.

“Sabrina has this incredible motor, and she’s clever with her racquet,” says Blatchford Clyne, who trains alongside the Sobhys in Philly, and will compete at the Open next week. “Amanda has a wide wingspan, and brain. She really understands space on the court, and how to use it to limit her weaknesses and play to her strengths.”

How far can Amanda’s strengths, and the court sense that Blatchford Clyne describes, take her? She has already risen as high as any American-born player in squash, but the final hurdle will be the toughest, as well as one that she knows well from her own family history and world travels.

For at least a decade, squash has been dominated by players from Egypt. Currently, seven of the Top 10 men and six of the Top 10 women are Egyptian. That includes the Top 2 on the women’s side, Nour el Sherbini and Nouran Gohar. At the three tournaments Sobhy played before San Francisco this year, she lost to Sherbini twice and Goruan once. Chances are one of the two Egyptians will be waiting for her in the later rounds in Philadelphia.

“The Eqyptian women came in and played this faster, more aggressive game,” Blatchford Clyne says. It’s still a game the rest of the world has yet to match.

During their visits to see their father in Cairo, the Sobhys have seen the passion that Egyptians have for squash first-hand.

“The clubs are never dead there,” Sabrina says. “Everyone is playing everyone, you can feel the support the sport gets in the country.” 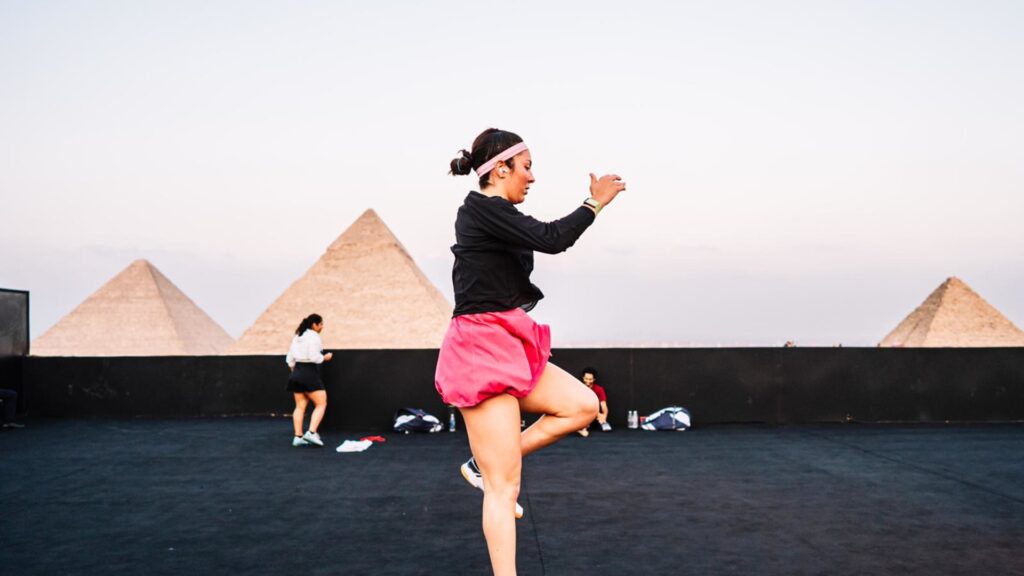 The Egyptians also brought s sense of cross-gender solidarity to the tours. The men and women traveled together, watched each other’s matches, coached each other—and, in the case of Ali Farag and Nour El Tayeb, married each other. In Philly in 2017, Farag and Tayeb became the first husband and wife to win a major title, the U.S. Open, on the same day. That solidarity helped lead to the men’s and women’s tours fully merging their operations in 2015. The U.S. Open was the first of the big squash tournaments to offer equal prize money. By now equal pay seems like a no-brainer to Amanda.

“I’m proud to be part of a sport that supports women,” she says, “and proud that the U.S. Open was the first with equal pay. The women have the most dominant players in the U.S.; why wouldn’t you want to back us?”

Over the next week in her adopted hometown, Amanda will try to take the next step up the steep squash ladder. In 2017, she tore her Achilles’ and was forced off the court for months; since then, her climb has been steady. To do that in squash, one of the most physically taxing of sports, you have to begin with fitness. Sobhy has worked on her core, her hip mobility, her shoulder, and “making sure my body is pliable” and “that I can sustain a long match.” As Joey Barrington would say, all of that work has her playing some heavily, heavily destructive squash right now.

But if the effort has been physical, the rewards have also been emotional.

“I feel like I’m finding myself though this process, believing in myself,” Amanda says.

As we know, it’s the process, not the destination, that matters. But U.S. squash supporters wouldn’t mind seeing Sobhy’s destination ending with her at No. 1 in the world.