For Philadelphia resident and women’s World No.6 Amanda Sobhy, the U.S. Open presented by Truist will be an experience like no other.

While the 28-year-old has played plenty of home tournaments, most recently in San Francisco, where she won the Oracle NetSuite Open, at the U.S. Open she will be able to walk from her house to the Arlen Specter US Squash Center, the grand new home of US Squash and venue for the tournament.

“It’s going to be interesting because you know this really takes the home tournament to all new level,” the No.4 seed says. “I live about a 15-minute walk away and I’ve never actually played a tournament where I I live, so it’s exciting and it won’t feel like a tournament, it’ll feel very much at home.

“For the first time I’ll have truly have all my friends and family right there at the new centre where I’ve been training, so I’m excited to be able to play at the U.S. Open. It’s now a true home tournament for me. I think it’s amazing!” 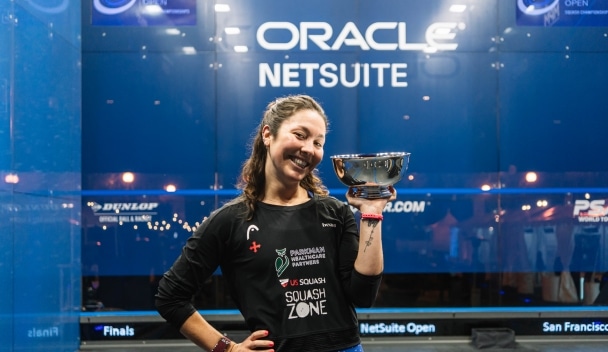 Despite a tough schedule, Sobhy has been in excellent form recently and is enjoying her squash.

Playing so close to home will no doubt come as a relief to Sobhy, who has had a gruelling 12 months. She has played six tournaments in Egypt over the last 12 months and says that from a preparation standpoint, playing in Philadelphia is a welcome change.

“To be able to play in the U.S. again is something that I’m so excited about. It has been a long season of travelling and a lot of trips to Egypt, which is a long flight for me, so to be able to now compete on home soil and compete with a home crowd supporting me, it fuels me a bit more,” she explains.

On her recent form, Sobhy says: “Considering how tough this year has been, I’ve done pretty well. I think this is the best stretch my squash career has had and thankfully I’ve stayed healthy and happy throughout most of it and have been enjoying it.”

Sobhy concludes that it is that last point, keeping a positive outlook, that has helped her achieve so much recently. She explains: “I think that’s been the key, the fact that I’ve been loving my squash. You kind of have to with the circumstances and the nature of the season. If you don’t love it, it’s going to be really hard to continue to keep going.”

The 2021 US Open runs between 01-06 October, in the Arlen Specter Center, Philadelphia, USA.